Long Beach State scores seven in 7th and 8th innings
By Ryan Schuler
April 14, 2012 (San Diego)--After six full innings of play, Long Beach State and San Diego State were tied at two in the middle of a hard-fought game on Tuesday. After eight full innings, Long Beach State led 9-4.
The 49ers broke open an otherwise close game by scoring seven runs in the seventh and eighth innings to defeat the Aztecs, 9-4.
The Aztecs, coming off weekend sweep at UNLV, looked to get back to its winning ways after dropping a nonconference game to the University of San Diego the night before.
CSULB jumped on the scoreboard quickly after Jeff McNeil led off the game with a triple, before Matt Duffy was able to bring him home with a RBI groundout. After two batters, the 49ers led 1-0.
The Aztecs would tie the score at one in the bottom of the first inning when, like the 49ers leadoff hitter did, SDSU leadoff man Greg Allen tripled and was brought home by a Tim Zier fielder’s choice to shortstop.
The 49ers gained a 2-1 lead in the top of the second inning when Johnny Bekakis singled, stole second, and was driven  home on a two-out single by Josh Guerra.
SDSU would tie the game at two in fourth when Zier doubled to right center, advanced to third on a wild pitch, and scored on sacrifice fly by Cody Smith.
The game would remain tied at two until the seventh inning when the 49ers pushed three runs across the plate to take a 5-2 lead. The Aztecs would get one back in the bottom of the seventh on a home run from Chris Wilson, but CSULB would put the game out of reach by scoring four more runs off losing pitcher Adam Anawalt, who gave up seven hits and seven earned runs in two innings of work. The Aztecs scored once more in the eighth to make it 9-4. 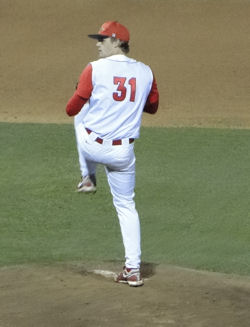 SDSU starter TJ Kendzora pitched well, going six innings, while allowing seven hits and two earned runs. CSULB’s Landon Hunt, who was credited with the win, pitched 1.1 innings without allowing a hit.
Allen was the only Aztec hitter with multiple hits, finishing with a double, triple and two runs. McNeil and Guerra both finished with three hits to lead the 49ers.

The Aztecs are back in action this weekend when they take on conference leader New Mexico in a three-game series starting on Friday at 6 p.m. at Tony Gwynn Stadium.