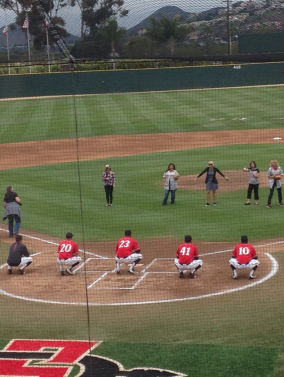 Photo:  seniors catch the ceremonial first pitch from their moms on Senior Day.

May 15, 2016 (San Diego) - The Aztec baseball team looked to end their home season on a strong note on Senior Day and boy, did they ever.  Cody Thompson started on the hill for SDSU against Nick Biancalana for Air Force.

The Aztecs wasted no time.  In the first, with the bases loaded, Spencer Thornton hit a sacrifice fly to bring home Chase Calabuig and SDSU took a 1-0 lead.  Andrew Brown hit a high hopper to left to drive home a run and the Aztecs went up 2-0 early.

The Falcons came right back.  In the second, Tyler Zabjonik doubled and scored Nic Ready, who had singled and the Aztecs saw their lead cut to 2-1.  Shaun Mize hit an RBI single and just like that, the Aztecs’ lead was gone.  The score was tied at two.

SDSU regained the lead, however, on Justin Wylie’s double that scored C.J. Saylor in their half of the second.  Alan Trejo singled thanks to the Falcons once again not being able to make the play at first base, causing a run to score and the Aztecs to take a 5-2 lead.  Tyler Adkison hit an RBI single to score Trejo and the Aztecs went up 6-2.

In the third, the Falcons got a run back on Tyler Jones’ sacrifice groundout, but the Aztecs still led 6-3.

In SDSU’s half of the third, another bad Air Force throw to first caused a run to come home on Wylie’s single (that turned into a double) and make the score 7-3 Aztecs.

In the fourth, Mize hit a sac groundout and the Aztecs led 7-4.

In the sixth, Adkison hit a sacrifice fly to drive in Calabuig and the Aztecs went up 8-4.

In the seventh, the Falcons got a run back on Ready’s double that drove in Adam Groesbeck and the Aztecs led 8-5.

In the Aztecs’ half of the seventh, David Hensley grounded into a double play ball, but the Falcons could only get the force at second and Denz’l Chapman came home to make the score 9-5 SDSU.

In the eighth, Thornton hit the Aztecs’ first home run of the series; a two-run shot to right to give SDSU an 11-5 lead late in the game.  They carried that score to a win and now go on a road trip to face UC Riverside on Tuesday night.