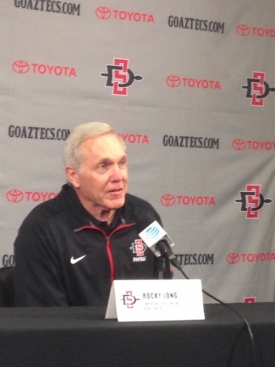 Obviously present on everyone's mind was the Aztecs' 63-31 loss to Colorado State on Saturday night.  Long was asked if fatigue from the 34-33 loss at Wyoming contributed to Saturday's loss. “I have no idea what happened last week," Long said. "You can speculate. I lost some sleep thinking about why. You can speculate all you want. Both (Wyoming) coach (Craig) Bohl and I have been around this game a long time, and we have been on both sides of the avalanche. I’ve been on one side where the avalanche was in your favor and the other team could do nothing about it, and I wish (Saturday) was the first time on the bad side, but it’s not my first time on the bad side when things start going against you sometimes. The other team just has your number and there’s nothing you can do about it."

The Aztecs' defense struggled quite a bit on Saturday night.  Long addressed the defensive concerns. "I’m concerned because we didn’t play worth a darn last week. But we played probably against the hottest offensive team in our league. Everything concerns us that hasn’t been good. We haven’t played as good on defense the last two weeks and we haven’t controlled the line of scrimmage on offense in the last two weeks. So yeah that’s a concern.  We’re not maintaining our blocks as well as we did against some other teams earlier in the season."

Just like the week the Aztecs played Wyoming, Long talked about Wyoming redshirt sophomore quarterback Josh Allen. "He is a great passer of the football, so if you’re concerned about keeping him in the pocket without getting a proper rush on him, he’s going to kill you throwing the ball."

Kelley talked about Allen too. “You just have to get more pressure on him. I think we’ll be able to come up with a good game plan, put some pressure on him and keep him in the pocket. He’s a pretty mobile quarterback.”

Asked on how the players were taking last Saturday's huge loss, Long said, "Even though last Saturday was bad, guess what, it’s exciting in the future. They get to play in the championship game. I think young people get over that very, very quickly.”

Long said that the Aztecs won't be changing their game plan much from two weeks ago. 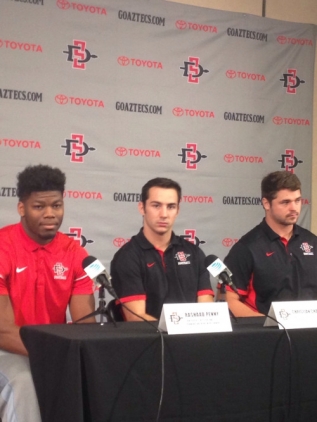 Chapman was enthused about playing Wyoming again. "I’m excited to play them. This is what it comes down to. This is what we play for. Our goal since day one has been the championship game. To go back up there and play the team that we did lose to, that’s still fresh on our mind. We want to win a conference championship. That’s been our motivation since day one.”

The quarterback says they will be intensifying their approach to practice in preparation for Saturday. “Definitely and little bit more confident because we know how they played us before. We know what they like to do against different sets, so we know how they’re going to approach us. We have some stuff ready. Seeing how they played us before and knowing how they’re going to play probably the same way coming into this game is going to be a big advantage for us and it’s going to be a good game.”

Kelley addressed the concern of players being down on themselves after Saturday and whether the defense will be back to normal this Saturday. “I believe we will. We had a good day of practice (Monday). Everyone’s really focused and keying on their assignments. I think we’ll be able to come together and perform well in the championship game…We were definitely down on ourselves (after last Saturday); we didn’t have a good performance. But we know we have to throw that out the window because it all comes down to this week. We have to be ready to go this week and put that in our past. Right now, all we’re thinking about is Wyoming.”

When asked what the defensive line needs to do better against Wyoming. “We need to get off some more blocks in the running game. They were able to run the ball pretty well actually.  We have to use our hands and get off blocks for that part and put some more pressure on the quarterback, keep him contained in the pocket because when he got out of that pocket, that’s when he hurt us the most. That’s what we need to improve on.”