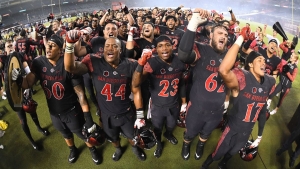 Mountain West announces game times for most of SDSU's 2019 slate

Additionally, 11 of the team’s 12 regular-season games are set for Saturday with the lone exception being Friday, Nov. 15 against Fresno State at SDCCU Stadium.

The Aztecs also have a start time for the home Friday game against Fresno State on Nov. 15, which will begin at 6:30 p.m. on ESPN2. SDSU’s game at Colorado State on Oct. 5 and a home encounter with Nevada on Nov. 9, slated for the ESPN Networks, will start at a time to be determined (generally announced 12 days out).

Additional broadcasts by AT&T SportsNet, Spectrum (Hawai’i) and Stadium will be announced in the coming months.

The Aztecs finished 2018 with a 7-6 record, including wins over No. 23/25 Arizona State and rv/No. 24 Boise State. SDSU is one of 14 teams to make a bowl game in nine consecutive seasons. San Diego State returns its leading passer (Ryan Agnew), rusher (Juwan Washington) and tackler (Kyahva Tezino) from a year ago.

*Mountain West opponent, other times will be announced at a later date