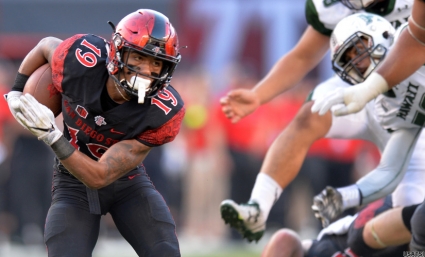 The Aztecs (8-1, 5-0) won their fifth straight and clinched at least a share of the Mountain West Conference West Division title by extending their lead to 2 1/2 games over the second-place Rainbow Warriors (4-6, 3-3).

Pumphrey had 85 yards by the end of the first quarter when the Aztecs led 14-0. It was his eighth straight 100-yard game, tying his own personal best and moving him two behind Marshall Faulk for the program record.

John Baron II kicked a pair of field goals in the second quarter, the only period the Aztecs didn't reach the end zone twice.

Christian Chapman passed for 76 yards, three touchdowns and an interception for the Aztecs. Dru Brown had 135 yards passing and three interceptions for Hawaii.

Next week, the Aztecs travel to Nevada to take on the Wolfpack.  Kickoff is at 7:30 p.m.