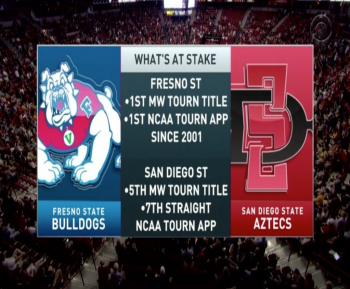 March 12, 2016 (Las Vegas, Nv.) - What do the Aztecs men’s basketball team and most people who travel to Las Vegas have in common?  They gamble and lose.

The Aztecs thought they could be the outlier to that statistic, but Fresno State had other plans.

SDSU jumped out to a 10-7 lead early in the first against the Bulldogs.  It was the Malik Pope show; the sophomore from Sacramento quickly led in scoring with 12 points.  Winston Shepard was his sidekick as usual with six points.

By the eight minute mark of the first half, SDSU was shooting 53 percent from the field.  By the three minute mark, they were on a 6-0 run and were outshooting and outrebounding the Bulldogs.

Fresno State still didn’t go away.  They tied the game at 36 with 37.4 seconds left in the first half and were beating the Aztecs 39-36 at the half.

The second half started with a three by--guess who--Pope--to tie the game at 39.  The Aztecs and Bulldogs went back and forth for a while, as teams always do in basketball, until the Aztecs blew open the game starting with a flagrant foul on the Bulldogs.  Freshman Zylan Cheatham came up with a huge block and a few baskets to give the Aztecs a 52-46 lead.

After giving up a game-tying three, Dakarai Allen got it right back for the Aztecs with a quick bucket in the paint for a 54-52 lead.

And then, there were 23.5 seconds left.  Allen had made one free throw and missed the other and the Bulldogs were still up 64-63.  FSU’s Julien Lewis made both of his free throws to give the Bulldogs a 66-63 lead.  The Aztecs gambled with the in-bound and lost 68-63.

So it’s Fresno State who wins the Mountain West Championship and who gets to go dancing now.  San Diego State, like everyone else who goes to Vegas with hopes of winning big, is coming home empty-handed and downtrodden.