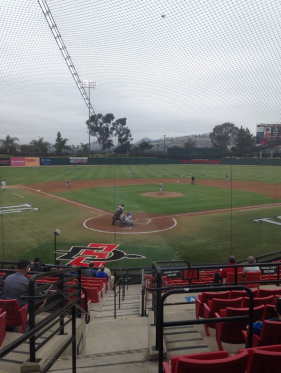 May 14, 2016 (San Diego) - After a bad loss in the early afternoon, the Aztecs looked to rebound in the second game of the doubleheader.  Brett Seeburger got the start for SDSU against Jacob DeVries for Air Force.

After a phenomenal pitchers’ duel for the first three innings, Tyler Zabjonik doubled with two outs in the fourth and drove home Bradley Haslam for a 1-0 Falcons lead.

In the Aztecs’ half of the fourth, Jordan Verdon hit a sacrifice fly to bring home Tyler Adkison and SDSU tied the game at one.  Spencer Thornton scored on a wild pitch and the Aztecs took a 2-1 lead.

In the fifth, Andrew Brown bobbled a routine grounder by Adam Groesbeck, causing a runner to come home and the game to be tied at two.  Groesbeck earned a triple.

In the sixth, Tyler Jones homered and the Falcons crept back to within one at 4-3.

But in their half of the sixth, the Aztecs blew the game open.  A wild pickoff throw drove home two runs and SDSU went up 6-3.

In the seventh, Haslam hit a sacrifice groundout and the Aztecs’ lead was cut to 6-4.

In the eighth, Mike Diamond threw a wild pitch and the Aztecs saw their lead cut to 6-5.

But the Aztecs added some insurance runs in their half of the eighth on Denz'l Chapman's RBI single to right to give SDSU a 7-5 lead.  Brown hit a sacrifice fly and the final score was 8-5 SDSU.  The Aztecs now lead the series two games to one.

The Aztecs play their final home game of the season on Senior Day tomorrow at 1:00 p.m.