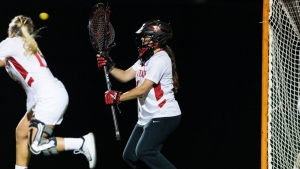 Sharretts collected save No. 406 of her career on a shot from George Mason’s Morgan Gunn with 40 seconds left in the first half. She now sits with 413 saves in her illustrious career donning the Scarlet and Black. Three Aztecs earned hat tricks, led by senior Morgan Taylor who earned the Aztecs’ first goal of the day. Junior Lexi Tan and freshman Camdyn O’Donnell each additionally added three scores to the board, while sophomore Bailey Brown had two goals and seniors Marissa Macrae and Emily Resnick rounded out SDSU’s scoring with a goal each.

The Patriots were led by a five-point effort from Deanna Balsama, scoring three goals and assisting on two other scores while tabbing a ground ball and draw control.  Netminder Melissa Semkiw amassed 13 saves and 14 ground balls while Erin Donoghue led GMU in draw controls with six on the day.

The Scarlet and Black were the first on the scoring attack for the second consecutive game as Taylor drove into the goal after just 30 seconds of game time had expired. SDSU’s early score led to a three-goal run with Tan and Brown each adding a score.

The Aztecs kicked off the game with strong defensive play, shutting out the Patriots for the first 15-plus minutes of the game. GMU earned their first goal with 14:46 left in the first half, but San Diego State responded right away with Tan’s second goal of the day. While the Green and Gold would not go long without a second score, finding the back of the net with under 11 left in the first, Tan tallied a hat trick with her third make of the day to respond and send the score to 5-2.

The Patriots added another goal quickly after, but it only fueled the fire of the Aztecs’ offense and led to a four-point run by the Scarlet and Black. Brown kicked things off with her second score of the day, followed by Tan’s fourth make of the game and two goals within 32 seconds of each other by O’Donnell. With three minutes left in the first half, the Aztecs led 9-3. GMU would respond one more time before halftime, sending both teams into the break with the score at 9-4.

Taylor kicked off the second half as she did the first, finding the back of the net to open the scoring in the second 20 minutes of play for the Aztecs. After the Patriots countered with a score, O’Donnell collected her first career hat trick to bring the score to 11-5 in favor of the Scarlet and Black.  Taylor became the third Aztec to tally a hat trick when she helped the Aztecs take advantage of a man-up offensive series, finding the back of the net for her sixth goal of the season.

The Aztecs are now 3-0 when they play at home and outshoot their opponent. Today’s win marked the team’s first consecutive wins (after its 16-11 win over Cal, Feb. 28) in the 2020 season.

“It was an important win for us to start getting some momentum,” noted head coach Kylee White. “As we head into our next home game, hosting Cincinnati (March 16, 1 p.m.), I’m really happy to see how we are improving each week and think it will benefit us as the season continues.”

The Aztecs close out their three-game homestand welcoming the University of Cincinnati to The Mesa on Monday, March 16. Opening faceoff is set for 1 p.m.