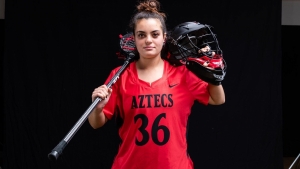 The Aztecs (0-1) held a 23-25 advantage in turnovers and matched the Cardinal in free-position shots, but were outshot by Stanford 41-24, including a 28-16 spread on goal.

The Aztecs fell to an early 2-0 deficit as the Cardinal scored two goals within 20 seconds of each other to open the game. Senior captain Morgan Taylor kicked off scoring for SDSU with an unassisted goal with 28:10 left in the first half.  After the Cardinal tacked on two more points, senior Julia Sheehan took advantage of a man-up free position shot to bring the Scarlet and Black back within two. Senior Taylor Sullivan followed her lead just two minutes later, finding the back of the goal with a strong assist from redshirt junior Lexi Tan and sending the score to 4-3 Stanford.

Freshman Camdyn O'Donnell earned her first goal in her first collegiate lacrosse match, clipping the Cardinal's following three-goal streak and bringing the Aztecs within three goals, 7-4.  Sullivan closed off the first-half scoring with a man-up goal with just 42 seconds left to play, shutting off another three-goal run by the Cardinal and sending the Aztecs into halftime with the game at 10-5.

Stanford opened the second half with three goals to boost their lead to 13-5. Sullivan and Shahrabani answered with marks of their own, bringing the score to 13-7. The Aztecs were silenced for the last ten minutes of play on the Farm.

SDSU hosts their first regular-season matchup at home on Thursday, Feb. 20 when it faces Arizona State at Aztec Lacrosse Field, starting at 1 p.m.