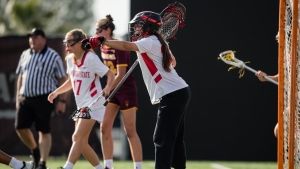 SDSU scored four goals in the final 10 minutes of play

The Aztecs' (1-2) scoring was led by sophomore Cailin Young who scored two goals while adding a draw control and a ground ball. SDSU also saw offensive production from seniors Emily Resnick and Taylor Sullivan, redshirt junior Lexi Tan, and junior Bailey Brown. Sharretts shined once again in the goal, racking up a season-best tying 13 saves and a .481 save percentage.

After a slight delay on the field to start the game, the Aztecs came out firing and scored the first two goals of the matchup. Tan followed her stellar six-goal performance against ASU with the opening score against USC and was followed by Resnick scoring her fourth goal of the season to open the game's scoring 2-0 for the Aztecs.

The rest of the game would be dominated by the Women of Troy.  While the Aztecs held off the Trojans' scoring attack until 22:19 left in the first half, USC followed its early-game silence with seven straight goals in the first half. Huff scored USC's first goal of the day to put the score to 2-1 and the Trojans quickly scored the equalizer less than two minutes later. The Cardinal and Gold took their first lead of the day with 19:04 left to play in the first off a shot to the back of the net by Sophia Donovan and made it four straight points with a goal from McMahon. Donovan found the back of the net for the second time with 16:32 expired in the first and gave the Trojans a 5-2 early advantage.

The Cardinal and Gold would add one more goal before a period of scoreless play from 13:36 to 1:58 left in the first half. USC would break the defensive battle and score the last points of the half with a woman-up free-position goal. The Women of Troy headed into the locker room with a 7-2 lead.

USC registered the first score of the second half at 27:09 left in the matchup to give them an 8-2 lead. Another scoreless period would ensue, this time for seven minutes and 32 seconds, ended by the Trojans' goal by Huff, her third of the day. The Cardinal and Gold made it 10-2 with Sophia Donovan's third goal of the day, scored with 17:46 remaining in the matchup. USC added three more to grow their largest lead of the day, 13-2.

After 35 minutes of silence offensively, SDSU rattled off four straight goals in the last 10 minutes of play. The Aztecs scored their first goal of the second half at 9:44 with a shot to the back of the net from Cailin Young assisted by Emily Resnick, followed by a free-position make by Bailey Brown. Young added her second goal of the day with a beautiful-spin move make and Taylor Sullivan followed with a free position goal to send the score to 13-6.

The Trojans added one more goal to end the game.

The Aztecs held the Trojans to 14 goals, four less than the No.15 Boston College Eagles did Friday when they fell 18-9 in Los Angeles, Calif. SDSU has not allowed more than 15 goals by a ranked opponent this season.

“When we were playing connected, we were making great things happen,” noted Head Coach Kylee White. “When we stuck to our game plan, amazing things happened. At some point, even though we were working hard, we were unable to mentally execute. We fought hard until the end, seen by the goals we produced in the last ten minutes, but we needed to capitalize on our offensive opportunities throughout the game and we didn’t do that. USC is a great team, great at capitalizing on second opportunities or your mistakes, and they showed that today.”

SDSU welcomes another Pac-12 foe to San Diego when they take on California on Friday, Feb. 28 at Aztec Lacrosse Field. The matchup between the Golden Bears and Aztecs is designated as the program's One Love Game, honoring the passing of University of Virginia lacrosse player Yeardley Love and promoting the One Love Organization's mission to educate young people about healthy and unhealthy relationships.