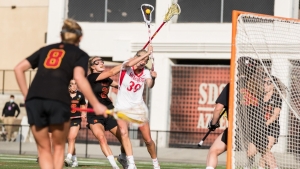 The Aztecs' (0-1) scoring was led by senior Lexi Tan who scored two goals on three shots while adding a caused turnover. Also aiding in SDSU's scoring were seniors Emily Resnick and Taylor Sullivan, each adding one point to the scoreboard, and junior Cailin Young, who added a goal and a draw control to her stat line. Senior captain Bailey Brown drew five draw controls for the Aztecs along with an assist and a ground ball while sophomore Camdyn O'Donnell assisted on two of the Aztecs' goals.

Tan started the day's scoring efforts with a goal in the game's first offensive drive. USC quickly responded on the other end of the field with a goal from Izzy McMahon assisted by Kelsey Huff.

The two programs went back and forth throughout the first half, with the Aztecs leading the Women of Troy 4-2 with 19:09 left to play and USC responding with three straight scores to move the scoreboard to 5-4. Young responded with a goal assisted by O'Donnell with 6:42 left to play in the half, which led to a USC 10-0 run through 17:26 left in the second half. Junior Arielle Shahrabani added the Aztecs' last score with 15:31 left to play in the game, assisted by Brown.

"Our efforts in the first half are what I am excited about to move forward with for the rest of the season," noted head coach Kylee White. "I am going to keep focusing on that [success] and work on how our team can bring that energy for two periods of play."

The Aztecs have just six days before they welcome another Pac-12 opponent to the Mesa. SDSU hosts the University of Oregon for a game under the lights Friday, Feb. 19. The opening draw is set for 6 p.m.