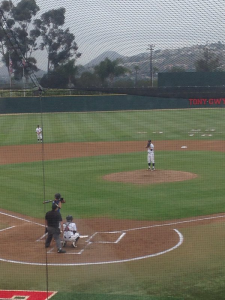 May 14, 2016 (San Diego) - After a win last night, Aztec baseball looked to repeat today in the doubleheader. Harrison Pyatt got the start for SDSU.

Air Force had other ideas.  In the first, Adam Groesbeck homered and the Falcons took a 1-0 lead.

In the second, Denz’l Chapman came through in a big way with a single up the middle that drove in two and the Aztecs took a 2-1 lead.

But the Falcons stayed on track.  After tying the game in the fourth, Spencer Draws hit an RBI single to left and Air Force took a 3-2 lead.  Travis Wilkie hit a beauty to center and the Falcons extended their lead to 4-2.

The Falcons didn’t care that Pyatt was pulled for Marcus Reyes; they kept hitting.  In the fifth, Tyler Zabjonik hit a sacrifice fly and the score went to 5-2 Air Force.