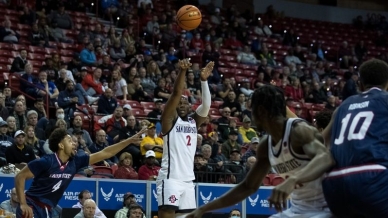 The Aztecs (6-2) hit 19 of 37 shots from 3-point range. They won their second in a row after consecutive defeats to Arizona and Arkansas at the Maui Invitational.

The Aztecs are 61-9 record in their last 70 non-conference games.

Up Next: San Diego State hosts Troy (6-2) of the Sun Belt Conference on Monday night. Troy has road victories over Florida State and Montana and gave Arkansas a tough game on the road on Monday night.