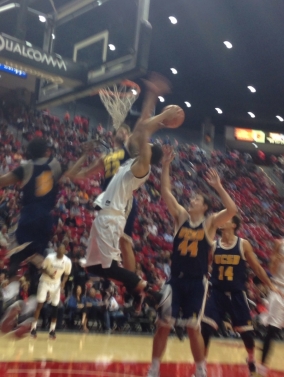 The Aztecs got off to a fast start which included a monster dunk by sophomore forward Zylan Cheatham to put the Aztecs up 9-6.  SDSU fouled hard and got to the line often.  Jeremy Hemsley shot the ball incredibly well from impossible angles of the court and by the end of the first half, Steve Fisher’s team held a 23-point lead over the Tritons, 53-30.  Sophomore guard Montaque Gill-Caesar led the Aztecs in points with 14.  SDSU made 60.7% of their field goals and completed an impressive 82.4% of free throws.

In the second half, the Aztecs picked up where they left off with two consecutive baskets--one a three pointer--from Cheatham.  Though the shooting trailed off a bit, the Aztecs still won their first exhibition game of the season by a score of 76-63.  Gill-Caesar led the team with 18 points.

The Aztecs will take on Cal State San Marcos Monday night at Viejas.  Tip-off is set for 7:00 p.m.