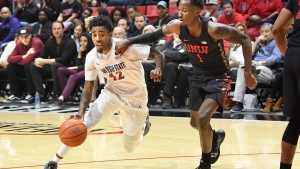 March 9, 2019 (Reno) - Caleb Martin scored 25 points and twin brother Cody added 14 to lead No. 17 Nevada to an 81-53 rout of San Diego State on Saturday night that clinched a share of the Mountain West title with Utah State.

The Martin twins combined to shoot 12 of 19 and Nevada (28-3, 15-3 Mountain West) finished at 53.1 percent as a team. Jordan Caroline has 16 points and Trey Porter had 13.
San Diego State had as many personal fouls as rebounds (25) -- with one offensive rebound.
Nevada grabbed 42 boards and beat the Aztecs 26-12 in the paint. Nevada made 20 free throws to San Diego State's seven.
The Wolf Pack jumped out to a 16-5 lead in the first five minutes in front of 11,243, but San Diego State answered with a 10-0 run in the final two minutes of the first half and entered the break trailing 42-37.
Nevada dominated the second half, outscoring San Diego State 39-16 and never trailing, en route to a perfect regular-season home record (15-0).