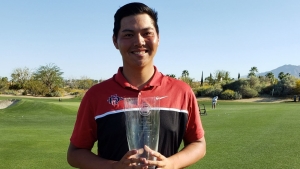 SDSU takes third as a team

February 19, 2020 (La Quinta, Calif.) -  Sophomore Leo Oyo (Tokyo) fired a final-round 5-under 66, highlighted by a chip-in eagle on the par-5 16th hole and an up-and-down par just off the green on the par-4 18th, to capture his first collegiate victory over a loaded field at The Prestige presented by Charles Schwab on Wednesday.

Oyo, who led by two strokes entering the final round on the par-71, 7,100-yard Greg Normal Course at PGA West, overcame two early bogeys, and used mix of power off the tee and an impressive touch around the green to best a field that included eight of the top 25 individual players in the nation.

Oyo became the third Aztec to win an individual event on the season, joining Puwit Anupansuebsai (Nakhon Phanom, Thailand) at the Bill Cullum Invitational (Oct. 14-15, 2019) and Steve Sugimoto (San Diego) at the CSUSM Fujikura Invitational (Feb. 3-4, 2020). It is the first time SDSU has had three individual winners in the same season since 2012 and the first time it has had three different champions since the 2009-10 campaign.

After bogeying the first two holes of the day, Oyo went 7-under the rest of the round with birdies on No. 3, No. 6, No. 8, No. 11 and No. 12. On the par-4 14th hole, Oyo had to take an unplayable lie after his tee shot found the desert shrub. He then hit an iron out of the dirt onto the green before making the clutch par putt. Oyo then went up-and-down out of the sand on the par-4 15th to save par once again.

On the 16th, Oyo was approximately 10 feet off the green before chipping just onto the green and into the hole for the eagle, which moved him from a tie for second to the outright leader.

After a two-putt par on the par-3 17th, Oyo found himself in a little trouble on No. 18 when his approach shot was left of the green. Needing to par to win the tournament in regulation, Oyo pitched onto the green to within two feet, before calmly tapping it in for the one-shot victory, finishing at 11-under 202 for the tournament.

As a team, SDSU finished third out of 16, a year after finishing in last place. San Diego State equaled its 277 from Tuesday and finished with a 54-hole total at 11-under 841, only trailing No. 16 Texas (-20) and No. 1 Pepperdine (-14). The Aztecs, who entered the week ranked 42nd in the Golfstat metrics, beat seven teams that were ranked ahead of them in the tournament, including No. 9 Texas Tech (-9) and perennial power and No. 33 Oklahoma State (-7), which rounded out the top 5.

Anupansuebsai carded a 4-under 67 for a second consecutive day to move from a tie for 54th after 18 holes to finish in a tie for 10th at 4-under 209. The junior recorded five birdies and a bogey in his final round on Wednesday.

Juniors Christian Banke (Danville, Calif.) and Sugimoto each shot 1-over-par 72. Banke had an up-and-down day with a 4-under 31 on the front nine and a 5-over 41 on the back nine, finishing in a tie for 21st at 1-under 212. Sugimoto, meanwhile, had a string of five birdies in seven holes, but had two bogeys and two double bogeys to finish 70th at 12-over 225.

Junior Callum Bruce (Banff, Scotland) overcame three consecutive bogeys to start his final round to finish with a 2-over 73 today, tying for 60th overall at 7-over 220. His final 18 consisted of five birdies, three bogeys and two double bogeys.

SDSU will co-host the Lamkin Invitational at San Diego Country Club in Chula Vista from March 9-10.