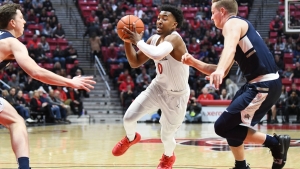 Story by Liz Alper
Photo courtesy goaztecs.com
February 12, 2019 (Fort Collins, Colo.) - Aztecs’ men’s basketball got another TV appearance as they headed out on the road again to face the Rams in Colorado after winning a close one at Viejas against Utah State on Saturday night.
SDSU struck first and senior Jeremy Hemsley broke it open for the Aztecs with a big three pointer.  The Aztecs were all about the threes as per usual, with senior Devin Watson nailing one and Hemsley hitting two.  The Aztecs were 3-6 from the three point line and you could make that 4-7 when redshirt sophomore Jalen McDaniels joined the party.  But the Aztecs faced a constant tormentor in the first half in Rams redshirt junior Nico Carvacho, who pulled the Rams within one and broke Colorado State’s all-time rebounding record.  Colorado State got some dangerous looks when SDSU couldn’t convert at their end of the floor, but excellent shot-blocking defense helped SDSU stay alive.  SDSU was hanging on to a one-point lead until McDaniels saved the day with a big three.  They weren’t off the hook completely thanks to redshirt junior Hyron Edwards’ buzzer-beating three, but the Aztecs still led 29-26 at the half despite Carvacho’s 10 points and seven rebounds.
SDSU started off the second half on a positive note, widening their lead.  McDaniels sank three straight baskets to start the half.  But their lead disappeared for the first time since the start of the game when redshirt junior Kris Martin sunk the game-tying three for the Rams.  But SDSU escaped again, going on a 10-0 run   McDaniels gave the Aztecs their biggest lead of the night with a smooth layup to give himself another double double--his ninth of the year--with 18 points and 12 rebounds. But Watson had him beat; he didn’t get the double double, but he hit a dagger three--his fifth of the game--that put the game away for the Aztecs and gave him 600-plus career points and 21 on the night.  The Aztecs win 71-60 to move to 7-4 in the Mountain West, defeating a team with excellent home advantage.
UP NEXT
The Aztecs return home again for a 4:00 p.m. tipoff with Boise State.
Like our SDSU sports coverage?  Donate to help support coverage of SDSU sports throughout the season!
Check out our sports section for more sports stories!
Follow @ECMagSports on Twitter for live sports coverage and in-game updates!
Box
Postgame notes