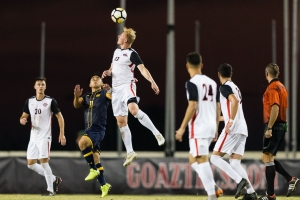 Marshall pulls away in second half with four unanswered goals

October 18, 2019 (San Diego) - The San Diego State men’s soccer team played straight up against the No. 21 team in the country, the Marshall Thundering Herd, for the first 45 minutes, but a second half goal scoring onslaught sent the Aztecs to a 5-1 defeat on Friday night at the SDSU Sports Deck.

In the first half, the Aztecs outshot Marshall 6-to-5 and the run of play was even.  The Thundering Herd got on the scoreboard first on a penalty kick in the 28th minute from Jan-Erik Leinhos who scored low to the left side of the goal.

The lead was short lived.  Less than three minutes later, at the 30:57 mark, Miles Stray opened his account with a goal to tie the game.  Pablo Pelaez took a corner kick and played the ball on the ground, along the end line and into the box.  Stray took one touch and beat the Marshall keeper inside the near post and the teams went to intermission tied 1-1.

In the second half Marshall had the better run of play and put four goals in the net.

Slightly more than two minutes into the second period, the Thundering Herd doubled its lead on a goal from Vitor Diaz.  He took one touch off a centering pass and scored to make it 2-1.

The score remained the same until the 65:56 mark when Milo Yosef scored the first of his two goals in the match.  Off an Aztec turnover in his team’s final third, Yosef took a low shot to the far post to make it 3-1.  Just over eight minutes later he scored again on a shot to the far post and it was 4-1.

Marshall got its final goal of the game in the 78th minute to make it 5-1.

Pelaez led the Aztecs offense with three shots and an assist.  Stray had two shots and the team’s goal.  Emil Kjellker, Adam Vargas and Hunter George produced one shot each.  Tetsuya Kadono, in his first regular-season action in goal this year, made three saves, but took the loss.

“The team had a really bright start,” said men’s head soccer coach Lev Krishner. “We were doing very well with what our plan was, but we are continuously giving up bad goals which break us.  I think our spirit was broken on their second goal, in the first few minutes of the second half, and we never bounced back from it.  That was disappointing and then the third goal came off a lost possession in our final third when we are in control of the ball.  Again, our spirits were down, and we don’t grab the ball, we don’t get it back.  This is something that is not generally in the character of our program and its disappointing to see the mental fracturing of our group.”

The Aztecs return to action on Thursday, October 24 with a Pac-12 conference match-up against Oregon State on the SDSU Sports Deck.  Kickoff is scheduled for 7:00 p.m.