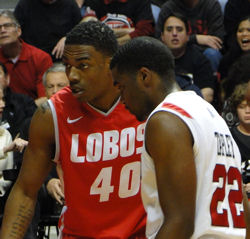 University of New Mexico Now In Sole Possession of First Place in Mountain West Conference
By Ryan Schuler
February 22, 2012 (San Diego)--This was as close to winner-take-all game as a regular season game gets, except this winner became leader of the Mountain West Conference and controlled their destiny of winning the regular season title.
The script was written. After losing to No. 14/16 UNLV, No. 13/15 SDSU (20-5, 6-3 MWC) was back at home on February 15 in the friendly confines of Viejas Arena. They were facing a team they had beaten earlier on the road. They had not lost back-to-back games since January 2010.

Unfortunately for the Aztecs, the Lobos had their own script in mind.

New Mexico’s Kendall Williams scored a game-high 21 points and Drew Gordon added 17 points and 17 rebounds as New Mexico defeated the Aztecs 77-67 to take sole possession of first place in the Mountain West.
The loss marked the Aztecs’ second conference loss in two seasons and pushed SDSU into a tie for second place with the UNLV Runnin’ Rebels. 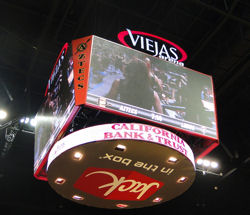 “Tonight we played a team that played better than anyone we’ve played to date,” SDSU head coach Steve Fisher said. “They beat us. I don’t think we lost, they beat us. They are very good.”
New Mexico won their sixth straight game and held SDSU’s Chase Tapley to seven points. Tapley, the conference’s leading scorer coming into the game averaging 16.2 points per game, did not score until 4:38 left in the game. 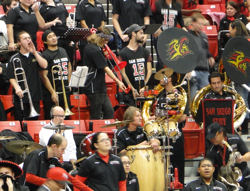 Jamaal Franklin scored 16 points for the Aztecs, while James Rahon chipped in 11 points and Tim Shelton scored 13 points.
Some famous faces in the crowd were Chargers wide receiver Vincent Jackson, NFL Hall of Famer and SDSU alum Marshall Faulk and former MLB No. 1 overall pick and West Hills High School and SDSU alum Stephen Strasburg.
The game was a physical one from the start. Each team was called for a technical in the first half of the game. Perhaps the oddest play of the game came when Franklin was called for a technical when he threw the ball off the face of a New Mexico player as he was falling out of bounds.
“We didn’t play well, we didn’t defend well, we didn’t rebound the ball, we didn’t do what we have been doing throughout the season,” Shelton said.