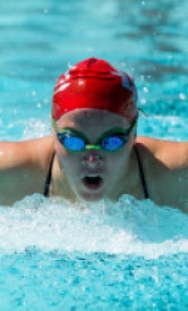 Swimmers win eight of 11 events to down Oregon State

November 5, 2016 (Corvallis, Ore.) - San Diego State concluded it stay in Oregon with a 109-89 dual meet victory over Oregon State today at the Beavers’ Osborn Aquatic Center. Saturday’s meet was an abbreviated program that consisted of nine individual events along with a pair of relays (no diving). With the victory, the Aztecs improved to 6-0 on the season.


In addition to SDSU and OSU, a team from Southwestern Oregon Community College also competed, scoring the meet against Oregon State, but not vs. San Diego State.

The Aztecs would go on to win six of the nine individual races with three of those victories being recorded by freshman McKenna Meyer.

The Aztecs concluded the meet by winning the 400 freestyle relay as the SDSU foursome of Harrison, Kassidy Henson, Kate Santilena and Samantha Guttmacher turned in a time of 3:35.10.

Up next for San Diego State are separate meets for the divers and the swimmers. The divers will compete at the annual USC Diving Invitational in Los Angles Nov. 11-13. The swimmer’s next event will be the A3 Performance Invitational hosted by UC San Diego and held in Monterey Park, Calif., Nov. 17-19.