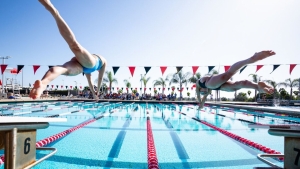 "We really had highlights all throughout our roster today," noted head coach Mike Shraeder. "Getting the chance to compete at home, we had a lot of our administration, a lot of people who work in our athletic department and support us on a daily basis come out and that just makes our young people and I feel great."

The Aztecs started off the meet strong with a one-two finish in the 200 medley relay, with the quartet of Elli Ferrin, Klara Thormalm, Courtney Vincent, and Alma Thormalm finishing in 1:41.70 while the relay team of Evonne Stehr, Morganne McKennan, Lizzie Menzmer, and Peyton Wilson touched the wall just behind them with a time of 1:45.64.

SDSU continued the first half of the swimming portion of the meet strong, taking first place in four of seven events before the break. Mia Ryan tapped the wall with a time of 1:51.97 to take home the 200 freestyle title, while Ferrin recorded a time of 55.63 to bring home gold in the 100 backstroke event. Klara Thormalm continued her reign on top of the breaststroke ranks with a first-place finish in the 100 breaststroke with a time of 1:02.05.

The Thormalm sisters continued SDSU's success after the first swimming break, as Alma Thormalm took home the 100 freestyle title with a time of 51.34 while her sister Klara swept the breaststroke events for the second-straight meet with the top time in the 200 breaststroke, tapping the wall in a season-best 2:14.79. San Diego State closed out the meet exhibitioning all swimmers in the final three events.