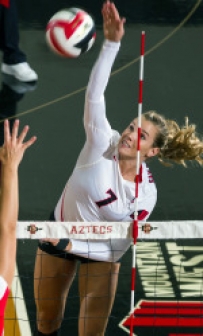 
Alexandra Psoma finished the night with 11 kills and completed her first double-double effort of the season with 12 digs, one shy of her career high. She also added five blocks to her final stat line.

Teammate Hannah Turnlund was the only other Aztec to end the evening in double figures in kills as she recorded 10.

Senior Alexis Cage just missed her second double-double of 2016 as she notched nine kills to go along with 11 digs over the four sets.

Setter Lauren Utchen led all player with 30 assists while Indigo Thompson had 10 in the two sets in which she appeared. Libero Devyn Pritchard finished with nine digs.

In the opening set, San Diego fell behind early by four points at 6-2, but fought its way back to tie it up at 8-8. After the teams traded points, the Spartans scored eight in a row to go up 17-9 and take control of the contest. SDSU managed only eight kills in the set and finished with an equal number of errors for a .000 hitting mark.

The second set saw the Spartans score the first seven points and never look back en route to the four-point win. The Aztecs did get within one at 13-12, but found themselves down by two to six points the rest of the way. SDSU continued to struggle offensively, recording only seven kills in the game with a -.094 hitting percentage.

After the break it looked to be more of the same with SJSU taking a lead and holding it over most of the contest. This time, however, the Aztecs came back to eventually tie the set at 19-19 after having trailed by seven at 17-10. The teams alternated scoring four points apiece until, with the score knotted at 23-23, a pair of San Jose State attack errors gave SDSU the two-point victory.

In the fourth set the teams played evenly as the contest saw the score tied on 12 occasion and the lead change hands five time. With the set deadlocked at 20-20, the Spartans tallied three straight points on two SDSU attack errors and a kill to go up 23-20. After the Aztecs countered with a point, the home side used a kill and service ace to win the set by four points and the match three-games to one.

San Diego State will now move on to Fresno where it will face conference foe Fresno State on Saturday, Nov. 5, at 1:00 p.m. (PT) in FSU’s Save Mart Center.