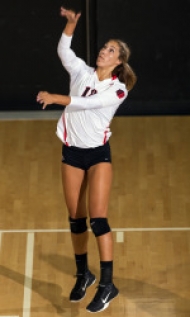 The loss was the third straight for the Aztecs, who saw their record fall to 14-13 overall and 6-7 in the Mountain West. Fresno State, meanwhile, improved to 13-12 overall and 4-10 in conference play.

Two of her teammates also ended the afternoon in double figures in kills. That duo included Alexandra Psoma and Alexis Cage, who recorded 14 apiece. Psoma also had five digs, a block and two assists while Cage had four blocks and nine digs.

Setter Lauren Utchen ended the day with 44 assists along with a kills and eight digs. Senior defensive specialist Danielle Bolden ended the match with 13 digs, four assists and a pair of service aces with Devyn Pritchard leading all players with 19 digs.

The opening set was a tight affair with the score tied on eight occasions. Neither team could gain the upper hand and late in the contest the scoreboard read 23-23. From there, the Aztecs got back-to-back kills by Harris and Psoma for the two-point set win. Harris led both teams with six kills in the contest as SDSU had 20 kills compared to 10 for the Bulldogs.

Set two was another close one that saw Fresno State with a late five-point lead at 22-17. From there SDSU scored six of the next seven points to tie it up at 23-all. The teams then alternated three points apiece to 26-26 when the home side got a kill and service ace to claim the 28-26 set victory.

The third set was the only one of the four that was decided by more than two points. With the score knotted at 6-6 early in the contest, the Bulldogs built a four-point advantage at 10-6 and led the rest of the way. SDSU got back to within a point at 15-14, but FSU held on, building its final winning margin to five points at 25-20.

Set number four saw Fresno State take the lead at 4-2 and build it to as many as six points at 18-12. The Aztecs, however, score six consecutive points to tie at up. The Bulldogs went ahead 23-20, but again SDSU came back even it up at 23-all. The teams then alternated points with San Diego State having three chances at set point, but finding themselves unable to convert. With the set tied at 27-27, the Bulldogs got a kill and an SDSU attack error for the final two points to claim the set (29-27) and the match.

San Diego State will now return home for its final three-match home stand of the season that begins with a match against Wyoming on Thursday, Nov. 10, at 6:00 p.m. on Aztec Court.