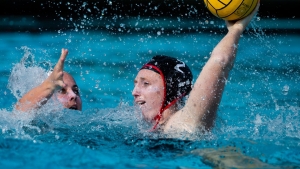 February 28, 2020 (Irvine) -  The No. 16-ranked San Diego State water polo team equaled its season-high for goals scoring in an 18-5 win against the Concordia University Eagles in each team’s Golden Coast Conference (GCC) opener on Friday afternoon.

The Aztecs jumped on the Eagles from the start.  They scored seven goals in the first period and never looked back.

SDSU got two goals from Hurst and one each from Canale and Bennett in the first four and a half minutes of the game.  Concordia responded with a tally, but Bennett and Higginson came right back and scored to push the Aztecs advantage to five goals, 6-1.  The teams split the last two goals of the period, with Peterson finding the back of the net with 12 second left to send the game to the second quarter with SDSU up 7-2.

Parenteau’s goal at 6:45 of the second made it 8-2. Bennett followed that score with her third of the game, with 4:41 to play before the half, to give San Diego State a 9-2 lead.  After Concordia scored to make it 9-3, Nuuhiwa found the back of the net with 1:30 to go and sandwiched around another Eagles tally, Bond scored with 44 seconds to go to send it to the intermission with the Aztecs up 11-4.

In the third quarter, Hastings, Leckich, Nuuhiwa and Bond scored to push the lead to 15-4 before a late tally from Concordia sent the game to the fourth quarter with the Aztecs leading by 10, 15-5.

In the last period, San Diego State shutout Concordia while getting goals from Canale, Binette and Bond for the final score of 18-5.

Jordann Heimback and Zoe Morgan split time in goal.  Heimback had six saves in the first and second quarters and Morgan made five stops in the third and fourth periods.

Since joining the GCC in 2014, San Diego State is 6-1 in conference openers with two of those wins, including today’s result, coming at the expense of Concordia University.

The win give the Aztecs victories its last three matches in a row, a season-best win streak.

San Diego State’s offense was successful on 18-of-29 shots with Bennett successful on 3-of-4 and Bond scoring on 3-of-5 attempts.   Parenteau recorded a team-best four steals and Bennett, Peterson and Binette had two assists each.

The Aztecs jump back into non-conference action on Saturday at No. 5 UC Irvine.  The game is scheduled for a 1 p.m. start.