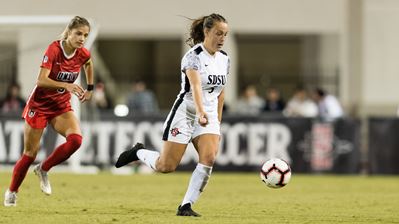 October 27, 2019 (San Diego) - Needing a victory to remain tied for first place in the Mountain West and with a first-round bye in the upcoming conference tournament on the line, the San Diego State women’s soccer team dominated the San Jose State Spartans in a 3-0 victory on Sunday at the SDSU Sports Deck.

With the win, SDSU (9-7-1, 8-2-0 MW) has secured one of the top-two seeds and a first-round bye in the MW Championship which begins on Nov. 5 in Boise, Idaho.  The Aztecs also keep pace with Boise State, which it is tied with at the top of the Mountain West table.  A win by the San Diego State at New Mexico next Friday combined with a Broncos loss at Utah State and the Aztecs will win the Mountain West regular-season championship.

SDSU came out in the first half of the opening period and didn’t attempt a shot until the 20:35 mark.  San Jose State took seven shots and had three corners in the first 15 minutes but were held to just one shot for the rest of the match.

When the Aztecs finally did get that initial shot off, it opened the offense up.

It took only three minutes from the first shot attempt, in the 21st minute, to get a goal and it was Phoebe Leitch who recorded the tally.  Jordan Girman played a ball to Chloe Frisch who was outside the 18, on the left side of the field.  Frisch served a ball to the back post. It bounced a couple of times and right to Leitch who slammed it home for her second goal of the season.  Girman picked up her first assist of the year and for Frisch it was her seventh assist, and the first of two on the day.

Just over seven minutes later, at the 30:33 mark, senior Rachel Speros scored for the first time in two seasons.  Again, Frisch picked up a ball just inside the Aztecs offensive zone and laid it off for a charging Speros.  The Danville, Calif., native took two touches and hammered a shot through the Spartan keeper’s hands to make it 2-0 Aztecs.

Despite being outshot 7-to-1 in the first 15 minutes, the teams went to intermission tied in shot 7-to-7.  The Spartans put five shots on frame in the first half, but senior keeper Brooke Lisowski turned them all away and earned her fifth clean sheet of the season.

In the second half, the run of play continued to favor San Diego State.  The Spartans (6-8-4, 4-4-2 MW) got off just one shot to SDSU’s five and the Aztecs took five corners.  The score remained 2-0 until the 73rd minute when Dominique Tucker removed all doubt about who would win the game.

Kiera Utush had the ball at the top of the 18 and passed to Laura Fuentes on her left.  Fuentes drove to the end line and centered it to the far post.  The ball was just out of the reach of Darcy Weiser, but Tucker was crashing the goal and neatly tucked it inside the post for the first goal of her college career.

From there the Aztecs ran out the clock to secure the team’s fifth win in a row and the first-round bye in the upcoming conference tournament.

For the match, Leitch led the team with three shots, all were on frame, with one being the game winner.  Frisch and Rachelle Elve both attempted two shots while Taylor Moorehead, Fuentes, Speros, Tucker and Veronica Avalos produced one shot each.  Lisowski made five saves in improving her record to 9-7-1 this season.

SJSU’s Gabriella Hurtado took a team-high two shots while keeper Kara Burns had four saves but allowed three goals in the loss.  Her record is 0-1-0.

Seniors Brooke Lisowski, Ariana Robles, Rachel Speros and Darcy Weiser were honored in a ceremony prior to the game.

“Our seniors have been fantastic,” head women’s soccer coach Mike Friesen said. “Obviously Brooke, with this being her only year (at San Diego State), has done a really good job of coming into our team and helping us out and I hope she feels the same way about the experience she has had.  As far as Ari, Rachel and Darcy are concerned, all three are really special people and I’m thankful to have had the opportunity to coach them for four years, and that I have gotten to be a part of their lives.  They have helped me grow as a coach and I have loved watching them develop as both players and as people.”

“This was a bigtime performance for us,” head women’s soccer coach Mike Friesen said.  “To get a 3-0 win at home; to finish our Mountain West home schedule undefeated and to put ourselves in a position to play for a (regular-season)championship next week is great.  I’m really excited about where this team is at and how we played today.”

The Aztecs wrap up regular season Mountain West play next Friday at New Mexico. San Diego State and the Lobos are scheduled to kick off at 6:30 p.m. and live stats and streaming video links are available through the women’s soccer schedule page at www.goaztecs.com.