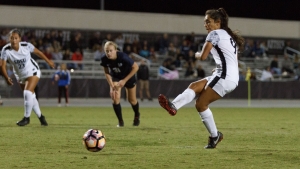 Laura Fuentes scored on a penalty kick in the loss

October 11, 2019 (Boise) - The San Diego State women’s soccer team spotted Boise State a pair of first half goals and then mounted a second half comeback, but it fell short in a 2-1 decision.

Trailing 2-0 in the 75th minute, Chloe Frisch drove to the end line on the right side of the box and was dragged down from behind which resulted in a penalty kick.  Laura Fuentes took the kick at the 74:19 mark, first faking to her right and then placing the ball into the empty left side of the net for her first tally of the season.

The Broncos struck first, early in the 14th minute.  They picked up a loose ball on the right side of the field and passed it to Raimee Sherle.  She continued down the sideline and played the ball into the box where Gabby Gillespie took one touch to put it in and give Boise State a 1-0 lead.

In the 42nd minute they doubled their advantage.  Off a throw in into the box, the Aztecs cleared the ball just outside the 18, but it came right onto the foot of Jennifer Turneck who placed inside the left post to make it 2-0.

For the match, Frisch led the attack with a game and season-high six shots.  Fuentes had three attempts, Taylor Moorehead took two shots and Darcy Weiser and Phoebe Leitch produced a shot a piece.  Brooke Lisowski had the aforementioned four saves in the loss.

The loss snaps the Aztecs three-game winning streak and leaves them in second place heading into their next match.

“It’s disappointing we didn’t at lead earn a draw today,” head women’s soccer coach Mike Friesen said.  “We definitely had the better run of play early in the game, but that second goal, late in the half, was a gut punch.  We didn’t do a good job clearing the ball and they took advantage of our mistake.  I thought we had the better run in the second half.  Sarah Broacha did a good job against (Raimee) Sherle all day. I think this is the seventh time we have faced her and she has yet to score on us.”

The Aztecs are back in action on Sunday in Logan, Utah.  SDSU faces off against Utah State with the kickoff scheduled for 12 p.m.  Streaming video and live stats for the match are available through the team’s schedule page at www.goaztecs.com.