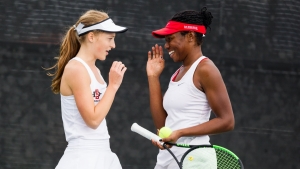 March 13, 2019 (San Diego) - San Diego State women's tennis cruised through its dual match on Wednesday afternoon, taking down Quinnipiac University 4-0. With the win, the Aztecs log a second straight match in which they hold their opponent scoreless.

On Wednesday, San Diego State put together two speedy doubles decisions to gain an early edge over the Bobcats, who also played a neutral-site match in San Diego earlier in the day against Southern Utah. Sophomore Nnena Nadozie and freshman Alicia Melosch put together their second straight win as a pair with a 6-2 decision over Dominique Vasile and Jennifer Lu in the top seed. Senior Magda Aubets and sophomore Abbie Mulbarger recorded a 6-2 victory of their own in the third seed against Stephanie Yanosov and Alexandra Mircea. Aubets and Mulbarger are now 2-0 when playing together in doubles this season.

In singles action, Nadozie put up a team-high fifth straight singles win with her 6-0, 6-0 decision over Jennifer Lu in the No. 2 seed. SDSU freshman Agustina Rimoldi Godoy also put together a dominant win, finishing 6-0, 6-1 against Courtney Nash in the sixth seed, and Aubets had the clinch match with her 6-1, 6-1 victory versus Payton Bradley as the fourth seed.

The Aztecs, who move up to 8-6 on the season, continue their homestand this Friday, March 15 when they host University of Houston. First serve is set for 2 p.m. at the Aztec Tennis Center.