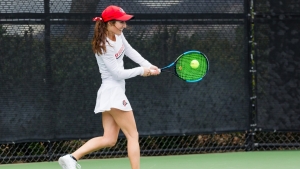 The Scarlet and Black were hoping to once again find their strength in doubles play, but dropped the second and third-seeded matches to give ASU the doubles point. Senior Jenny Moinard and freshman Aesha Patel paired up for the No. 3 match, which they dropped 6-2 to Sammi Hampton and Samantha Alicea, and sophomore Abbie Mulbarger and freshman Agustina Rimoldi Godoy fell 6-3 to Tereza Kolarova and Savannah Slaysman on court two.

Sophomore Nnena Nadozie and freshman Alicia Melosch were making headway on court one against seventh-ranked Lauryn John-Baptiste and Ilze Hattingh, but the match was left unfinished since the point had been decided on the second and third courts.

In singles action, SDSU dropped the first match to finish as sophomore Mia Smith fell 6-1, 6-1 to John-Baptiste, but Melosch was able to pull off a win on court four against Slaysman, 6-3, 6-2.

Moinard was unable to nab a win on court one, where she fell 6-4, 6-1 to Ilze Hattingh, while the Sun Devils’ win was decided on court five, where Mulbarger was overcome by Hampton 7-6 (6), 6-4.

The remaining courts finished out their matches and the Aztecs were able to tally one more point where Rimoldi Godoy’s opponent, Sasa Klanecek, had to retire after two sets (6-7 (5), 6-1), while Nadozie dropped  a close 6-3, 7-6 (6) decision to Kolarova in the third seed.

The Aztecs, now 5-3, take a day off from competition and return to the ATC Monday afternoon for a 2 p.m. dual against Hawai’i.