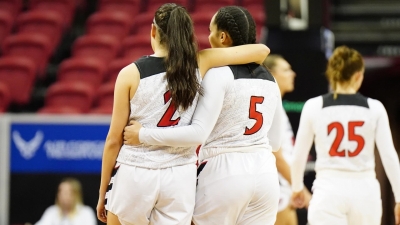 March 1, 2020 (Las Vegas) - With the score tied at 79 in overtime, a jumper from Utah State’s Hailey Basset with three seconds left in extra play would decide the fate of San Diego State women’s basketball’s 2019-20 season as the sixth-seeded Aztecs fell to the 11-seed Aggies 81-79 in the first round of the Mountain West Championships inside the Thomas and Mack Center Sunday evening.

SDSU (14-17, 9-9 MW) came back from as much as a 15-point deficit as junior Téa Adams tied the game with 5.7 seconds left to send the game to overtime. Competing in their fourth overtime game in their last five Mountain West tournament games, the Aztecs were not able to secure a lead at any point throughout the game. Sophomore Kennedi Villa had a career night with nine rebounds and nine points, while senior Taylor Kalmer tied a career-high with 22 points on 7-for-16 shooting, five boards and three assists.

The game started as a defensive battle with both teams going without a basket for the first two and a half minutes of play. Utah State took an early 4-0 lead, scoring the first field goal of the game with 7:13 left to play in the first quarter. SDSU added its first points to the board with two Adams free throws twenty seconds later. The Aggies’ lead would grow as large as six points before the Aztecs cut their advantage to three with three made free throws. SDSU’s first field goal came from a deep three-pointer made by Ramos, breaking the team’s 0-for-9 start from the floor. Dornstauder would add a layup a minute later to bring the game’s score to 11-10 Utah State.

Even with the Aztecs’ struggles shooting in the first period, making just two field goals on 14 attempts, SDSU’s nine-for-10 free-throw clip kept the two teams tied 14-14 after 10 minutes of play.

Utah State took a quick lead at the start of the second period thanks to a six-point run led by a three and layup from Hailey Basset. The Aztecs responded with five points to make it a one-point game. The teams would trade baskets back and forth, but the Aggies continued to hold an advantage over the Aztecs throughout the second period. Turnovers plagued the Scarlet and Black, totaling eight to Utah State’s five, but the story of the first half was the teams’ vast difference in first-half shooting clip. In the first 20 minutes of play, the Aggies shot 35.7 percent from the field while the Aztecs were shooting at 21.4 percent.

Even with their advantage in field goal percentage, the Aggies headed into the locker room with just a 34-25 lead after 20 minutes of play.

The Aggies quickly scored the first six points of the second half to grow their lead to 15 points. Senior Monique Terry silenced USU’s early run with the Aztecs’ first second-half points with a make from beyond the arc, followed by a give-and-go make by Adams that cut the Aggies’ lead to 10.

SDSU would make attempts to slash Utah State’s lead, including a seven-point run from 5:36 to 3:09 left in the third to make it a four-point game, the closest the score had been since 4:21 left in the first half. At the end of the third period, the Aztecs slimmed the Aggies’ advantage to seven points, 54-47.

The beginning of the fourth quarter saw Kalmer make it a five-point game with her 16th and 17th points of the game, quickly followed by Villa collecting her own rebound and putting it back in the basket to cut it to three. Senior Baylee Vanderdoes snagged the offensive rebound and handed it off to Kalmer to make it a two-point game with 7:50 left to play.

Utah State responded with seven straight points to make it a nine-point game with 6:27 left to play. SDSU made a run when it counted, going for eight straight points to cut the score to 63-61. The Aztecs tied the game up for the first time since the end of the first period with a Villa layup made with 3:07 left in the game. After the Aggies went up with 19 seconds left in the game, a layup from Adams with 5.7 seconds left in the fourth period would send the game into extra time.

The Aggies scored the first five points in the extra period, but Sophia Ramos scored seven straight points to help SDSU tie the game with 2:34 left. Utah State went back up by three with 29 seconds left only to see Taylor Kalmer bury a three to tie the game. Bassett would score her game-winning shot from the top of the key with three seconds left. Bassett scored the Aggies' final seven points.