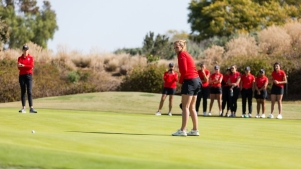 SDSU last competed at the Dr. Donnis Thompson Invitational on March 10-11, 2020 before the rest of the competitive spring season and fall campaign was canceled because of the COVID pandemic. San Diego State is still the reigning Mountain West champion after claiming the 2019 title.

The Aztecs begin their 2021 slate by hosting the Lamkin Invitational, scheduled for Feb. 8-9 at The Farms Club in nearby Rancho Santa Fe, Calif. Launched in 2013, SDSU’s lone home tournament of the season will include a match-play format for the seventh straight year. In the 2020 event, SDSU edged San José State, 3-2, in the championship to claim the Lamkin Invitational after defeating UC Irvine, 4-1, and Central Arkansas, 4.5-0.5 the previous day.

Following a three-week break from competition, the Aztecs head to the Bruin Wave Invitational March 1-3 at The Saticoy Club in Somis, Calif. The event was held at San Luis Obispo Country Club for each of the previous five years.

SDSU then leaves the Golden State for the first time of 2021 when it heads to Dallas for The Bruzzy, hosted by North Texas. San Diego State competed at The Bruzzy in 2018, when it finished seventh in a 15-team field. It will be just third trip to the Lone Star State for the Aztecs.

For the third consecutive year, SDSU is scheduled for the Silverado Showdown, April 5-7, in Napa, Calif. San Diego State placed 10th on the Silverado North Course in 2019 in a strong field which featured nine top-40 schools but had its 2020 trip canceled due to COVID.

The Aztecs are also scheduled for the Dick McGuire Invitational, April 11-12, at the UNM Golf Course in Albuquerque, N.M., in the final tune-up before postseason play. The event is usually held in the fall where SDSU has competed at the Dick McGuire each of the previous five years. San Diego State was fifth in the 2019 fall version of the DMI.

For the eighth consecutive season, the Mountain West Championship will be contested at Mission Hills Country Club, April 20-21, in Rancho Mirage, California. In the last championship in 2019, the Aztecs outlasted Nevada by one stroke for their second league title in the last five championships, as three individuals finished among the top 15.

SDSU will be seeking its 10th postseason berth as a team in the last 11 chances when the NCAA conducts its regional championships, May 10-12, across four sites, including Baton Rouge, La.; Columbus, Ohio; Louisville, Ky.; and Stanford, Calif. If San Diego State qualifies for the NCAA finals, it will compete in the national championship series for the first time in program history, May 21-26, at Grayhawk Golf Club in Scottsdale, Ariz.