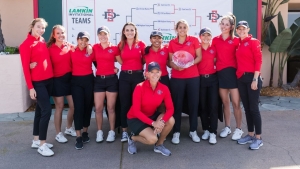 A day after defeating UC Irvine 4-1 and Central Arkansas 4.5-0.5, things were much tougher Tuesday as the wind picked up and made the par-72, 6,329-yard course more difficult as the day went on.

The Aztecs once again road the playing of Sara Kjellker (Hollviken, Sweden), Fernanda Escauriza (Asunción, Paraguay) and Gioia Carpinelli (Boppelsen, Switzerland), as the trio each won their match to finish the tournament with a perfect 3-0 record.

Kjellker, who yesterday put together back-to-back 7&6 wins, downed Natasha Andrew Oon 1 up today. The junior never trailed in the match.  Escauriza, meanwhile, edged Maddie White 1 up as well, winning on the par-4 18th hole with a par. Carpinelli also stood tall with a 1-up victory over Antonia Malate.

April Ranches suffered her first defeat of the tournament for SDSU, falling to Ysabel Tran 2&1, while Ella Adams lost to Kajsa Arwefjall, 4&3.