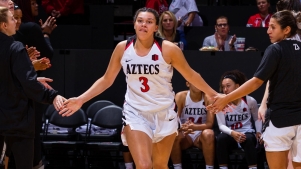 The Aztecs have struggled mightily this season in the opening minutes of the game. Air Force was able to convert a couple SDSU turnovers in to fast break points and Coach Terry took a timeout after just 1:30 had elapsed in attempt to avoid a big first quarter deficit – it worked. Sophia Ramos nailed a three on the next possession and shortly after SDSU went on a 12-2 run to open a 21-14 lead.

SDSU had less than 10 bench points in each of their last four games but had 11 in the first quarter Wednesday evening led by Zayn Dornstauder’s six. Ramos also had six first quarter points on a pair of three-pointers and the Aztecs held a 21-18 lead at the end of one.

Air Force forced six SDSU turnovers in the first five minutes of the second quarter and worked the ball inside as part of a 13-4 run to go up 27-25. 20 of the Falcons’ first 27 points came in the paint.

Both teams had 12 turnovers in the first half and Air Force held a 32-31 lead at the halftime break. The Aztecs made their first three pointers but then missed their next six. They ended the game 5-for-17 from deep.

The Falcons began to pull away in the third quarter with an 8-0 and 13-2 run. The Aztecs had more turnovers (six) in the quarter than field goals (four) and the Falcons shot 55 percent in the third and took a 49-42 lead in to the final frame.

Early in the fourth quarter, the Falcons pushed their lead to double-digits and SDSU couldn’t get closer than eight points because Air Force went 12-for-13 from the free throw line down the stretch.

Air Force had four players in double-digits, led by Kaelin Immel’s 16 points. Riley Snyder had 15 while Emily Conroe had 13 and Haley Jones added 12.

STAT OF THE GAME:

The Aztecs hit their first three three-pointers and then made just two of the next 14 attempts.

The Aztecs were 9-for-13 From the free throw line. Last time they played Air Force they were 26-for-37, setting season-highs for free throws made and attempted.

Mallory Adams finished with 15 points and 12 rebounds. This was her sixth double-double of the year and her ninth game with 10 or more rebounds.

The Aztecs return home to host San José State Saturday at 1:00 p.m. for Girls and Women in Sports Day.