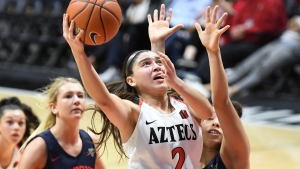 January 24, 2019 (San Diego) - The San Diego State Aztecs women’s basketball team fell to Fresno State 87-81 Wednesday evening inside Viejas Arena. SDSU trailed by 10 points early in the fourth quarter and rallied to tie the game with three minutes left, but the Bulldogs quickly responded with a 6-0 run and improved to 5-1 in league play.

The Aztecs had five players in double-figures and were led by Najé Murray’s 22 points. Sophia Ramos and Murray both were 7-for-14 from the floor and Ramos finished with 17 points and six assists. Mallory Adams continued her fantastic freshman campaign with 14 points and seven rebounds. Téa Adams (12) and Zayn Dornstauder (10) also chipped in double-digit points.

After a couple of shaky moments to start the game, the Aztecs avoided their recent trend of falling behind double-digits in the first quarter. They fell behind 8-2, but then quickly tied it up at 9-9 on a Najé Murray three-pointer.

The Aztecs were a perfect 8-for-8 from the free throw line in the first quarter, helping them take a 24-23 lead. The 24 points were the most SDSU has scored in the opening quarter this season.

“I was really proud of the way we started offensively because that’s been a sore spot for us,” Head coach Stacie Terry said after the game. “I like the way that we started keeping the game close. I challenged our starters to get off to a better start and to lead us in that way.”

Fresno State’s Candice White, the conference’s leading scorer, started to heat up in the second quarter and hit four consecutive three-pointers as the Bulldogs opened up an 11 point lead. Mallory Adams hit a deep three at the buzzer to close the gap to 47-39 at the halftime break. This was the most first half points the Aztecs have allowed in a game this season.

The trio of Sophia Ramos, Mallory Adams and Najé Murray scored 31 of SDSU’s 39 first half points.

Fresno State missed six straight shots early in the third quarter, which led to a 7-0 Aztec run as they pulled within three points. Candice White knocked down another three to start the fourth quarter to push the Bulldog lead to 10, but then the Aztecs started to make their comeback.

SDSU went on 14-4 run and tied the game at 73-all with 4:25 left. After trading buckets, Fresno scored six unanswered points and SDSU wouldn’t get closer than four points the rest of the way.

Candice White led all scorers with 29 points. She was 10-for-17 from the field and 6-for-9 from three. Aly Gamez also poured in 20 points with nine assists and was a perfect 12-for-12 from the FT line and Maddi Utti added 19.

“This team has a tremendous amount of grit and they play hard. It’s really nice to not have to coach effort but we need to make sure that it’s consistent.” Head coach Stacie Terry

The Aztecs scored a season-high 24 points in the first quarter. However, the Bulldogs scored 47 first half points, the most SDSU has allowed.