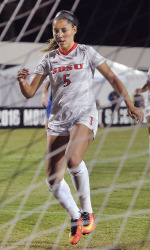 Photo:  Victoria Barba's penalty kick gave the Aztecs a 2-0 lead over San Jose State and helped the Aztecs move into the final of the 2016 MW Tournament.  Courtesy goaztecs.com

November 3, 2016 (San Diego) - San Diego State gained a measure of revenge and moved into the final of the 2016 Mountain West Championship Tournament with a 2-0 victory over San Jose State Thursday evening on the SDSU Sports Deck.

The victory provided some redemption for San Diego State, which dropped a 4-0 decision to the Spartans in conference play in early October. It was also San Jose State that upset the Aztecs at last year’s conference tournament, winning 2-1 on penalty kicks to deny SDSU an NCAA tourney bid.

The Aztecs dominated Thursday’s contest early, and it was in the 15th minute that the home side struck for its first goal of the night. Aliyah Utush got behind the Spartan defense and ran into the right side of the penalty box before unleashing a shot that was saved by SJSU goalie Ana Calero. In the ensuing scramble, Utush pushed the ball back to Angela Mitchell, who made no mistake from 10 yards out to give SDSU a 1-0 lead.

Just over 12 minutes later, a hand ball infraction in the box by the Spartans awarded a penalty kick to San Diego State. Victoria Barba calmly stepped up and deposited her shot into the lower left corner to double SDSU’s advantage.

“It was a great team performance tonight,” commented Aztec Head Coach Mike Friesen.  “We came out with an awesome mentality and battled all over the field. We had so many great individual performances and probably had our best team performance of the year.

“The entire team followed the game plan and executed well. We created many good chances, but it was great to get the two first-half goals and be able to rest some people again.”

The Aztec midfield and back line was instrumental in keeping the Spartans from getting quality chances on goal. Even though San Jose State held a 10-8 advantage in shots in the contest, SDSU keeper Gabby English was called upon to make only one save while recording the team’s eighth shutout of the season.

San Diego State now advances to its fifth consecutive Mountain West Tournament championship game where it will meet top-seeded UNLV on Saturday, Nov. 5, at 7:00 p.m. (PT) on the Sports Deck.