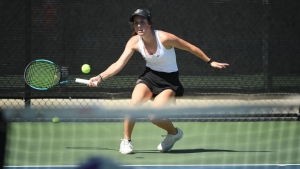 Due to scheduling changes, only three of the four Aztec doubles tandems played Saturday, each continuing their success from the first day of competition with victories in the semifinals.

In the red draw, junior Nnena Nadozie and sophomore Alicia Melosch easily moved onto the finals of their flight with a 6-2 victory over Cal State Northridge (CSUN)’s Ekaterina Repine and Lauren Anderson.

Senior Mia Smith and junior Abbie Mulbarger earned a spot in the white draw’s finals with a 6-1 victory over the University of Utah’s duo of Jasmine Rich and Anya Lamoreaux. In the same flight, new SDSU team members freshman Julia Jordan and junior Tamara Arnold snagged a 6-3 win over CSUN’s Lisa Marie Wurst and Emma Roenholt.

Freshman Cècile Morin and sophomore Agustina Rimoldi Godoy will play in tomorrow’s consolation finals as a result of the black draw’s change.

In singles play, Morin earned the Aztecs’ first victory on Saturday, besting the University of Texas at El Paso’s Thassane Abrahim 7-6 (2), 7-6 (4) in the gold draw.  On the other side of the gold draw, Jordan faced a tough three-set loss, dropping a 4-6, 6-1, 6-2 decision to San Jòse State University’s (SJSU) Rozalina Youseva.

Rimoldi Godoy followed with a close win over SJSU’s Laura Malsert, besting the Spartan 7-6 (5), 7-6 (3) to move onto the finals of the silver draw. In the white flight, Melosch fell to SJSU’s Alba Pedrero Galindo 7-5, 6-1 while Mulbarger also competed against the Mountain West foe, defeating the Spartan’s Lara Marco Mas in a three-set match, 6-0, 7-6 (5), 6-3.

Arnold impressed once again in just her second performance donning the Scarlet and Black, claiming a 6-4, 6-0 victory over Grand Canyon University’s Natasha Puehse to move onto the championship match of the red draw.

Nadozie closed out the day with a strong statement, topping Utah’s Katya Hersh 6-1, 6-1 to claim the Aztecs’ fourth spot in a championship match Sunday.

Competition concludes on Sunday, Sept. 29. The same schedule of the first two days will continue into the third day of play, with doubles action set to begin at 9 a.m. with singles play immediately following.

Admission to the Fall Classic I is free and fans are encouraged to park in P7 on the corner of 55th Street and Montezuma Road. The Aztec Tennis Center is located just beyond Tony Gwynn Stadium, SDSU Softball Stadium and the Aztec Aquaplex on the northwest edge of campus.