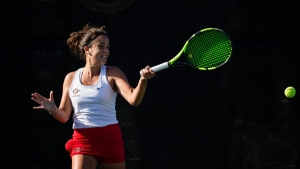 October 21, 2018 (San Diego) - San Diego State women's tennis capped its participation in the ITA Southwest Regionals with a win in both doubles and singles in Sunday’s consolation draws at the Aztec Tennis Center.

In the 9 a.m. doubles draw, senior Magda Aubets and sophomore Nnena Nadozie faced Michelle Pits and Alzbeta of Hawai’i, defeating the Rainbow Wahine 7-6 (1) in the contest for the Aztecs’ sole doubles victory of the morning.

Aubets and Nadozie’s win in the 9 a.m. doubles draw allowed them to advance to the 10 a.m. matchups, where they couldn’t keep up with USD’s Daniela Morales and Gemma Garcia, falling 6-1 to the Toreros.

Sunday’s consolation matches marked the conclusion of San Diego State’s participation in the ITA Southwest Regionals. Up next, the Aztecs will host its final fall event, the SDSU Fall Classic II, from Friday through Sunday, Nov. 9-11, at the Aztec Tennis Center.