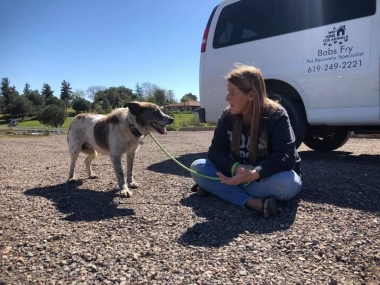 Photo:  Babs Fry and a rescued dog relax in a 2020 photo near Fry's van that recently was totaled. Fry is hoping for volunteers to step up and help out while her team is looking to raise money to replace the van.  Photo courtesy of Babs Fry

July 23, 2022 (San Diego’s East County) -- Babs Fry is the one who gets the call from a frantic pet owner when a cat or dog goes missing, the one the California Highway Patrol calls when someone's pet is found wandering on a freeway.

For nearly a decade, Fry has been the one people turn to to help return wayward animals to safety.

Now Fry is the one who needs some help.

The Jamul resident and former realtor, who now runs a nonprofit called A Way Home for Dogs, was driving on Interstate 805 earlier this month when a speeding car rear ended her Chevrolet Express van.

The 52-year-old Fry was in the middle of driving around setting up of traps to help bring a dog to safety in the South Bay area when her "Babs Bus" was totaled. She suffered some bumps and bruises, but otherwise had no major injuries.

She's now recovering from the accident and waiting for news from her insurance company about compensation for the van. She has been checking into buying a gently used van similar to the one she had, but the prices are staggering, she said. Additionally, because of production slowdowns due to COVID-19, supply challenges and high consumer demand, the availability of the vehicle she needs could be months or even years away.

Fry said she doesn't like to reach out to the public to ask for help but is in need of volunteers who can help at her Jamul-based rescue where there are 60 dogs that need to be cared for.

"A big thing people don't realize is that very few people step up," Fry said. "In the field, it's me and a handful of people. Shelters are at capacity, rescues are at capacity. My rescue doesn't have traditional donors like regular rescues. I'm still trapping, taking dogs to rescue events. None of that happens without financing."

Additionally, anyone looking to help contribute to buying a replacement vehicle for Fry can visit AWayHomeForDogs.com to donate, use PayPal to AWHFD11@gmail.com or Venmo @AWHFD11 or mail a check to AWHFD at 5073 Central Ave. #2001 Bonita, Calif., 91908.

Fry's support staff said they are also hoping to catch the attention of a car dealer who is willing to donate a van that can meet the minimum specifications of height, length, seating, cargo and climate control.