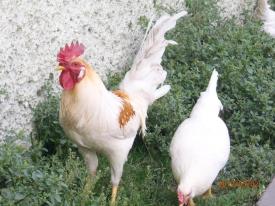 By Miriam Raftery and Janis Mork

December 13, 2012 (El Cajon) – “We’re going back to our roots in El Cajon, because this was agricultural community,” Councilman Gary Kendrick told East County Magazine after the El Cajon Council unanimously approved both community gardens and chicken ownership for city residents.

Kendrick noted that the El Cajon valley was the grape-growing capital of the United States before Prohibition and orange groves once occupied the hillsides.  “There is great soil on the valley floor,” he said, adding that residents will now be able to grow fresh vegetables on numerous vacant lots in the community.

The measure had brought support from members of the community, including many Iraqi Chaldean immigrants, he noted.

“One reason I thought it would be important to have community gardens is we have a large  population of residents who live in apartments and can’t grow gardens,” added Kendrick, who said that he learned with his own family that having a garden helps kids develop healthy eating habits for life.

Chicken ownership, a proposal introduced by Kendrick, was passed as part of a broader zoning ordinance update.  At the Planning Commission’s recommendation,  El Cajon residents can now own one chicken per 100 square feet of backyard space, up to a maximum of ten chickens—but no roosters.

While many praised the Council’s actions on chickens and community gardens, another action by two El Cajon officials has caused some ruffled feathers.

Members of the Basso family spoke at Tuesday’s meeting to criticize Mayor Mark Lewis and Councilman Bob McClellan for writing letters in support of sentencing leniency for former Councilwoman Jillian Hanson-Cox.   Hanson-Cox pled guilty to federal crimes after embezzling millions of dollars from her former employer, a company owned by the Basso family.  At the sentencing hearing, it was revealed that Hanson-Cox used the misappropriated funds not only to fund celebrities for the Mother Goose Parade, but also for lavish personal expenses. 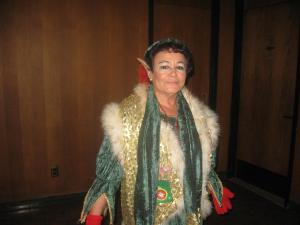 Sunshine Horton, aka Sunshine the Elf, also came to speak.  She expressed joy and gratitude for the City’s help when she was homeless and first moved out to El Cajon—and said she now seeks to help others in return.

She told Councilmembers that she feels “blessed” adding, “I was homeless when I first came out here. I was at a children’s hospital and the children were smiling and getting a bear…“El Cajon kind of hugged me and helped me.”

She then voiced her goal to partner with Councilman Bill Wells, whose son is serving in Afghanistan, to help U.S. soldiers stationed there.

“I want to know what to do for Afghanistan. I did ten years of yellow ribbons. I do everything with my heart. We’ve gotta do good things for one another,” she said in the spirit of the season.  Council member Wells thanked Horton for her ideas to help our troops. She wished the Council “Happy Hanukkah, Happy Kwanzaa, and most of all, Merry Christmas!”

With the fervor of a religious revival meeting (and disregarding separation of church and state) Mayor Mark Lewis then asked, “Do you know what the reason for the season is?” Sunshine declared,  “Jesus!” A couple of the Councilmembers responded, “Amen!”

“This is a preliminary agreement. BMW has been a part of this community for many, many years. They came to my office many months ago,” Ambrose said.  They hope to put this dealership in “the current rental place location and rename it ‘El Cajon BMW.’”

Councilman Ambrose hailed the effort as both pro-active and a win-win to improve El Cajon Boulevard. “We work to these things for everybody’s benefit.” Councilman Bob McClellan agreed, “It’s a win win. I congratulate both sides.”

Councilmember Wells concluded, “We actually have an opportunity to enhance the business climate by being creative.”