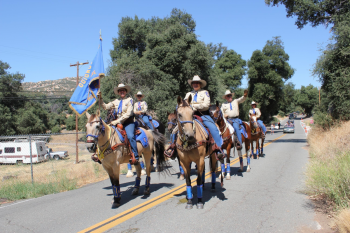 July 5, 2013 (Descanso)--You’re invited to come “Back to the Old West” at Descanso Days on July 13, 10 a.m. to 6 p.m. and join in some good old-fashioned backcountry fun at the historic Descanso Town Hall including live music, deep-pit barbecue, a parade, booths, prizes and more.

Guests can also cheer on entries in the Descanso Days Parade – Aussie, the Australian shepherd, on his motorcycle; a variety of unique and antique tractors; Eric Runningpath and Daughter (professional Native American dancers); and several mounted groups including the Grand Ladies of the Old West, the Winchester Widows, the Hole in the Wall Gang, and the Escondido Mounted Patrol. For excitement in the sky, members of the El Cajon Classic Hangar Club will fly over the Parade route in their WWII airplanes.

Listen to live music while you chow down on pit-barbecued beef (cooked by the master chefs of Pine Valley Mountain Riders). Three bands will present a variety of musical styles throughout the day - Just Friends will start the musical lineup with their bluegrass twang, followed by Breaking Bad’s classic rock-and-roll, and finally, a great opportunity to dance to the country-Western sounds of Barbed Wire.

There will be several family-friendly options for the kids after the parade. You can stop by Eric Runningpath’s booth for Native American sand-painting; visit the Mounted Patrol’s Meet-and-Greet to see their horses close-up and hear stories about them; or buy an all-day pass to Game On Game Theater, a state-of-the-art gaming studio on wheels, with Wii, Xbox, and Playstation 3 consoles and 55” HDTV screens.

You can try your luck at the raffles and silent auction. Prizes include paintings by artists Phoebe Burnham (a living legend) and Martha Kennedy, $250 in cash, Aztec tickets, several cords of wood, dinner and golf packages at Sycuan, a free Descanso Town Hall rental, a Disneyland Family Ticket Pack, and an autographed Chargers football, plus a variety of gift baskets and other fun items.

The event takes place Saturday, July 13th at Descanso Town Hall, 24536 Viejas Grade Road, Descanso. Remember, the roads close at 9:30am and re-open after the Parade, so it’s best to come “Back to the Old West” early and stay for the whole day.