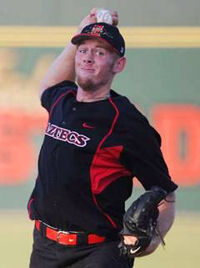 By Ryan Schuler
April 11, 2012 (San Diego’s East County)--It was as if Washington Nationals starting pitcher and San Diego native Stephen Strasburg didn’t miss a beat. After making only five Major League starts in 2011 after coming back from Tommy John surgery, the West Hill High School alum was on the mound at Wrigley Field starting the first game of the 2012 season April 5 against the Chicago Cubs.

Despite not being credited with the win, Strasburg pitched seven strong innings in his first career Opening Day start, allowing only five hits and one unearned run, while striking out five as the Nationals bested the Cubs, 2-1.

“It was just awesome getting a chance to pitch in Wrigley Field on Opening Day,” Strasburg said to MLB.com. “It’s just a lot of fun going out there being in somewhat of a hostile crowd. At the same time, the fans know the game. Just think about all the Hall of Famers who played here. It’s an honor.”
The Cubs took a 1-0 lead in the fourth inning on a Marlon Byrd single, and until the top of the eighth inning, it seemed that the one run would be enough for Chicago starter Ryan Dempster, who allowed only two hits and one earned run in 7.2 innings. Yet, with two outs and the bases loaded in the eighth, Cubs reliever Kerry Wood would walk in the Nationals’ Ian Desmond to tie the score at 1. The Nationals would ultimately take the 2-1 lead with two outs in the top of the ninth inning when Desmond singled to right field off Cubs closer Carlos Marmol. No one was happier for his teammates than Strasburg.
“That’s what baseball is all about. As a player, you want to be put in those situations. Watching from the dugout, you almost feel like you’re in the box there with them.”
Desmond led all hitters with three hits to go along with one run and one run batted in.