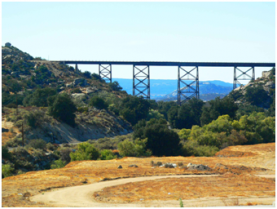 Ernest Dahlman, chief executive officer of Pacific Imperial Railroad, has announced that he has signed a 99-year-lease with the San Diego and Arizona Eastern Railway Company. He is raising funds to restore and operate tracks on the Desert Line to run through mountains and deserts in San Diego, Imperial County and Baja, Mexico.

Dahlman hopes to link the freight line up with trolley and train lines in San Diego, as well as a transcontinental railway route to the East.

The route through East County includes the rugged Carrizo Gorge.  An amazing feat to complete, the line was dubbed the “impossible railroad” by engineers when it was first proposed.

The idea for the railway started with Edward Harriman, who controlled the Union-Pacific Railroad and Southern Pacific lines. He partnered with sugar mogul John D. Spreckels, who despite numerous ownership changes and catastrophies, led the ambitious effort to get the line built.

Groundbreaking was held in 1907. But soon after, a depression caused funds to dry up.  Then Harriman died and his heirs canceled the contract with Spreckels. So Spreckels raised the money on his own.

In 1910, the first passengers were carried to Agua Caliente hot springs in Mexico. But the next year, revolutions broke out in Mexico and workers left their jobs until the rebels surrendered.

Next, Southern Pacific sued Spreckels, trying to get back $3 million it had advanced, but the suit was later dismissed.  When World War I broke out in Europe, there was no money for railroad construction.

The line, it seemed, was cursed.  In 1916, the worst floods ever to strike San Diego at that time washed out dams and roads, flooding Campo Creek.  An engine derailed and sank in the mud.

In 1917, the U.S. government seized all the major railroads to fuel the war effort and construction halted. Spreckels traveled to Washington D.C. and convinced the government to grant an exception, arguing that the line was vital for defense due to military installations in San Diego. 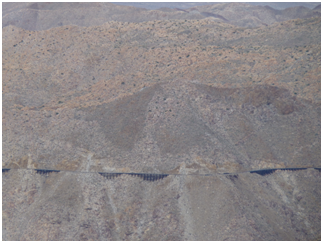 Finally, construction began on the toughest stretch of tracks: the steep and rocky Carrizo Gorge.  Plans called for 17 tunnels along the 11 mile stretch.  A cave-in killed a workman, who was buried in the collapse.

Work was also slowed by the influenza epidemic worldwide, which sickened many laborers in the construction camp.

Finally, the work was complete. The Gold Spike Limited chugged down the tracks on its maiden run from San Diego to the Carrizo Gorge Station. Spreckels jumped down, pulled off his coat and drove in a solid gold spike on November 15, 1919.

In its heyday, the line carried passengers to the Agua Caliente racetrack- a popular spot during Prohibition, and provided a vital connection from San Diego to Arizona.

But the tale doesn’t end there.  Rockslides delayed trains repeatedly, sometimes for weeks at a time.  Flash floods, a fire that burned for four days, and even a hurricane wreaked havoc with the tracks.

The railway also faced competition from automobiles as the horseless carriages gained popularity. 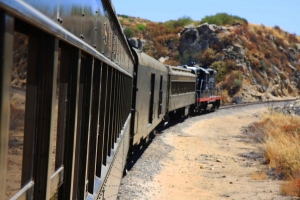 After Spreckels’ death, the heirs sold off their interests. Later the California Public Utilities Commission granted permission to shut down the line. The last train ran its final run in January, 1951.

You can still ride the rails on an old-time train along a portion of the line at the Pacific Southwest Railway Museum in Campo.

But someday soon, East County residents may once again hear the whistle and the roar of trains across the line that traversed some of our region’s most rugged and spectacularly beautiful terrain – if Ernest Dahlman succeeds in his dream to restore the line.

The author incorrectly notes the line was shut down in January 1951. The last passenger service was in fact discontinued in January 1951, but he SD&AE continued to carry freight as a Southern Pacific line from the Imperial Valley to San Diego until 1980. The line was sold to several private operators in the years that followed, one of who later reinstated the line through the Gorge in 2004, only to  embargo this segment 3 years later. However, freight service continues on each end of the line. A quick check to Wikipedia would have confirmed these facts. With all due respect to the author, the railroads primary function was the transport of freight, which will also  be the primary and only reason for re-opening the line.

There is not 1 foot of track between Campo and Plaster City that is not falling apart. Good luck!