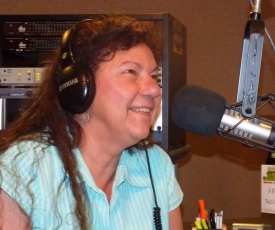 The show will feature “the major events of the day that rural people care about—with heavy emphasis on `news you can use,’” including crime, political and business news, according to the station website. “We’ll tell you what happened during the week and make sure you know what’s coming up over the weekend.”

Jannen broadcast her first one-hour show on April 2. Things went great—until she discovered she’d run through her scripted material in about 40 minutes. “Fortunately I have a chatty engineer,” says Jannen, who improvised by putting him on the air. For future shows, she hopes to add some guest interviews, such as topic experts, local leaders or local editors offering updates on regional stories.

Her ascendancy into a stellar journalism career didn’t take the usual career path.

“I started out working in the trades, but my life took a sharp turn. I lost a finger in a printing press,” she recalls.
Raised in Oregon, she came to San Diego to pursue a degree in engineering, but never completed it. “Before I knew it, I was married, expecting a child and living in Alpine,” Jannen recalls.

Asked how she got into journalism, she replies, “I was discovered.”

An editor for the Alpine Sun, assigned to write a story about Jannen’s successful goat farm, shared coffee and conversation that opened a new career path for Jannen. “I showed her something I had written, a fiction spot based on my experience,” the new radio host recalls. “She cried in the right spot and said `Why are you not using this talent?’”

Jannen began writing feature stories for the Alpine Sun. She moved to Campo, where people began calling her to tell their stories. Soon, she found her true love: investigative reporting.

“My first exposé was on illegal dumping of transformers by the County in Campo,” she recalls. “After that, I was addicted to investigative reporting.” She later started the Eastern Empire Guardian—an online news site dealing strictly with backcountry news in East County. “I built it from scratch…It was fun and educational,” she recalls.

Later offered a job as managing editor of the Alpine Sun, a more lucrative position, she folded the Guardian and went from working at home to working 60 hours a week. She also freelanced for other news outlets. For a time, she moved back to Oregon after accepting an offer from the Wallowa County Chieftain as managing editor. Her husband , David, stayed at their Campo ranch, with plans to sell the home, then move to Oregon. Then the bottom fell out of the local housing market, so Jannen returned in 2007.

In addition to the publications named above, her work has appeared in the San Diego Union, San Diego Union-Tribune, North County Times, The Daily Californian, The Daily Astorian, and other media outlets.  She also created the original website for the County’s Task Force on Fire Protection and Emergency Medical Services, chaired by Supervisor Dianne Jacob.

Building a radio news department for Alpine’s 107.9 is a departure from newspaper work and one she regards as an exciting change of pace. Her show will focus on news and events in and around Alpine and the backcountry and will be calibrated to the quality that has garnered multiple awards over the years, according to the station’s website.

Those awards include prestigious first places from California Newspaper Publishers Association for her work in environment, education and border coverage, as well as recognition from San Diego County Board of Supervisors and California State Assembly for her expose of non-residents sending children across the border to attend school in California.

Her reporting of the battles surrounding the proposed Campo landfill won her recognition in other venues, including a book on the subject and morel awards. Her breaking stories have been followed by national and international news venues, including The Christian Science Monitor, 60 Minutes and 20-20 and have resulted in reforms in county, state and federal policies. Her community service includes serving as a member on the Comprehensive Economic Development Strategy committee and the Reural Economic Action League, a backcountry economic development think tank.

Established six or seven years ago with an ‘80s music format, the FM radio station changed ownership and two years ago brought Steve Hunyar on as station manager. Known by the tagline “my 107.9,” it is run entirely by volunteers—though Hunyar hopes to attract sponsors for shows such as the TGIF Report so that hosts such as Jannen will ultimately be paid.

“We’re a little station serving the community,” says Hunyar, who has led efforts to change the station’s “culture” by adding Jannen’s news show as well as sports, a morning drive show with traffic and weather, and political programming described by Hunyar as “hard-core conservative.” The station attracts listeners from as far away as Germany—including members of the Armed Forces who tune in to listen to one of the station’s broadcasts of local Little League games.

Jannen says her show will include news reporting as well as analysis and discussion about backcountry and Alpine issues. Why should you tune in? Because Jannen promises her coverage of each topic will be relevant to East county listeners, revealing “why you should care and how this will affect your life.”

I enjoyed reading your article. I bookmarked your site and will continue to check it out for more wonderful articles like this.