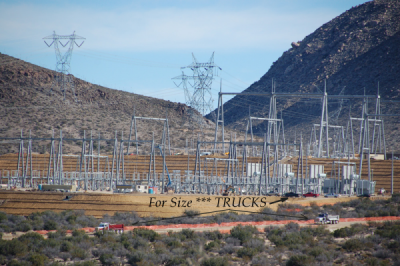 March 16, 2014 (San Diego’s East County)--During one of the worst droughts in San Diego County history, a backcountry group has filed a complaint against San Diego Gas and Electric (SDG&E) regarding its flawed water supply plan for construction of its ECO Substation (photo, left), Boulevard Substation, and 14 miles of new 138KV line.

Backcountry Against Dumps (BAD), a nonprofit organization dedicated to defending groundwater-dependent communities from environmentally unsafe facilities and projects, is seeking an order against SDG&E, contending that the company violated a mitigation measure (MM HYD-3) that would directly impact eastern San Diego’s already strained water supplies.  The complaint was filed with the California Public Utilities Commission (CUPC) and asks the CPUC to rescind SDG&E’s water supply plan and permit to construction the ECO substation project, among other actions.

Most of the backcountry in San Diego County depends on groundwater, unlike the rest of the county that utilizes water imported from other sources.

The complaint states that SDG&E has failed to identify “one or more confirmed reliable water sources that when combined meet the project’s full water supply construction needs.”

According to a press release issued by Donna Tisdale, secretary of BAD, three of the water sources cited by SDG&E are not only unconfirmed, but may not be available at all--the Live Oak Springs Water Company, the City of San Diego, and groundwater from the Campo Indian Reservation.

Live Oak Springs Water Company was fined a million dollars and the CPUC asked a judge to place the company into receivership last year because of a variety of violations including illegal water sales to developers, as ECM reported. The CPUC denied a request for rehearing in a scathing response.  More recently Live Oak was prohibited from selling water to Beta Engineering for the project, the complaint states, yet SDG&E continued to list Live Oak Springs as a reliable and confirmed source.

SDG&E’s permit with the City expired in 2013 and has not been renewed, the suit contends.

As for wells on the Campo Indian Reservation that SDG&E indicated would provide the largest share of water for the project, only a fraction of that was delivered when deliveries were suspended amid revelations that the Campo tribe’s General Council n ever approved the pumping or sale of groundwater off the reservation.  Moreover, this water draws from the same sole source aquifer that provides drinking water to Boulevard and other communities.

“The lone remaining source, the Jacumba Community Service District, cannot even come close to meeting the project’s remaining construction water supply needs, and appears to be in violation of its own governing documents by selling water outside its sphere of influence,” said Tisdale.

According to the UT-San Diego’s website (http://www.utsandiego.com/news/2014/mar/13/east-county-water-use-sdge-substation-complaint/), SDG&E said it had not been served with the complaint as of March 13. The complaint was filed on March 10.

But SDG&E disputes contentions in the complaint.

“The utility has complied with terms of the state-approved water-supply plan throughout construction and is buying its water from the City of San Diego and the Jacumba Community Services District,” SDG&E spokesperson Jennifer Ramp said, U-T San Diego reports.

Even if true, however, it remains unclear just how those two sources alone could provide ample water for a project that now needs triple the amount originally estimated, if the other two anticipated sources have dried up. The City is facing its own water woes, having recently drained Lake Morena reservoir to just 3.7 percent of capacity to meet the city’s own drinking water demands.

Ramp wrote in a statement that the SDG&E plan “is intended to prevent negative impacts to groundwater resources and ensure that there is sufficient water to meet the needs of the project through a combination of water purchased from water districts/utilities and local groundwater supplies.”

However, a recent groundwater impact report of the 1,500-acre Soitec Solar projects planned in Boulevard indicated that the impact to local groundwater from major projects in the area is a real threat.

Dr. V.M. Ponce, a hydrology professor at SDSU, who conducted that investigation, concluded that “excessive reliance on limited groundwater resources, over and above current consumption, is bound to place at risk existing uses and users, both natural and anthropogenic. Domestic groundwater users on both sides of the U.S.-Mexico border are likely to be affected.”  He has estimated that Soitec’s’ water use could lead to ecosystem collapse in the Boulevard area—and that’s without accounting for SDG&E’s trebled water demand for its nearby substation and other projects.

BAD’s law firm, Volker Law, has requested a prehearing for April 11, as well as a merits hearing on May 15. Both are requested to be held in Jacumba Hot Springs so that impacted residents may attend.