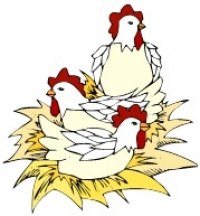 “I’ve been hearing from a lot of people who already have chickens,” revealed Councilman Kendrick, who thinks it’s time to bring illicit chicken owners out of the shadows. “Unreasonable prohibitions don’t work. They proved that with alcohol back in the ‘30s.”

If Kendrick prevails, El Cajon residents won’t have to bootleg leghorns--or other varieties of hens. Roosters will still be banned, however, due to noise concerns.

The Councilman intends to ask staff to draft up an ordinance for Council to review that would change zoning requirements to allow chicken ownership, as other communities include San Diego and Santee have already done.

Kendrick’s mother, a Santee resident, benefitted from that city’s recent legalization of chickens and now enjoys hand-feeding her flock.

The Councilman previously introduced the issue of legalizing backyard chickens in El Cajon, only to vote to table his own measure. That unusual move came after Mayor Lewis reminisced about working for the Department of Agricultural during a devastating Newcastle epidemic.  (The Mayor indicated the outbreak occurred in 1987, however California experienced outbreaks in 1971 and 2002 In those years, millions of birds were put to death to halt spread of the disease.)

“I’ve done some research and I don’t think there’s a serious issue with that,” Kendrick told ECM when asked about the Mayor’s Newcastle concerns.