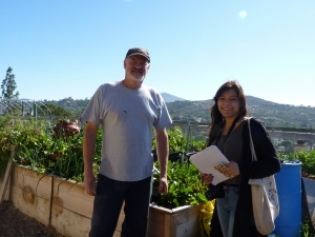 January 28, 2016 (Spring Valley) -- Spring Valley farmer Don Axe has used extra space in his backyard to create his own agricultural business, Valley View Urban Farm. He can now make anything from soap to ice cream. Axe has found a way to keep all different animals such as chickens, rabbits, goats, ducks, a pet dog and even a pot-bellied pig, also growing vegetables and fruits--all on just a half-acre lot.

He’s an accomplished farmer with four first place prizes won in the Del Mar Fair for his own homemade cheeses. You can learn what it takes to make his award winning mozzarella and more when he teaches his next cheese making class--one of several courses he teaches for those seeking farming opportunities in small spaces. 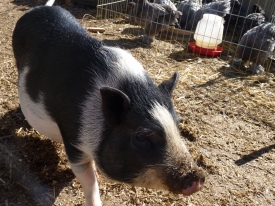 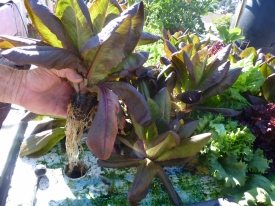 g at Don’s farm, we were welcomed by Piglet, the pot-bellied pig and Buster, the dog. We entered through a white picket gate to the backyard behind the home he’s lived in for 10 years. The first thing we saw were plants galore, lots of potted vegetation set up in an interesting way.

"We do hydroponics and soil gardening, all organic,” he said. Hydroponics is a floating system and Axe uses a floating mat that he bought at Home Depot. He saves 95% on water, and it only takes him one month to grow lettuce that contains all the right nutrients and micronutrients.

“These plants are very happy, and we don’t have to worry about gophers,” he 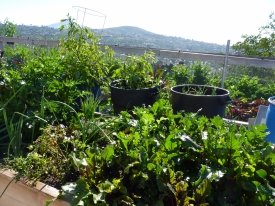 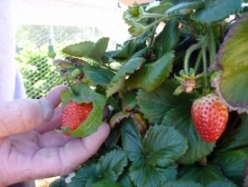 A raised bed is right next to it, but this one has soil. The plants recognizable are celery, broccoli, beets, and other winter veggies.

He definitely has a great system because even now in wintery January he has ripe and red strawberries and tomatoes growing.

We walked only a couple steps away, accompanied by piglet, and met the chickens and hens that he uses for eggs. Near the end of the yard he has Flemish rabbits that he raises.“Wonderful pets,” he tells us while holding up Jack, a 20 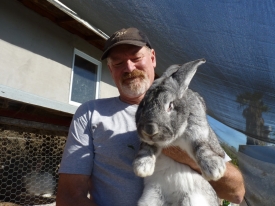 With so many things to take care of, 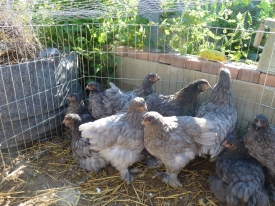 we wondered where he found all the supplies to contain every fruit, vegetable, and animal.

“Everything here is repurposed - or I got it all free off Craigslist,” he said proudly. That includes chicken wire, fencing, wood, and bricks. He also has veggies growing in trash cans that he salvaged off freeways where they were dropped.

He let’s us know that he also has another farm with even more animals located in Jamul. There he raises organic pigs and chickens, “We process and make nitrate-free bacon and sausage,” he explains.

Here in Spring Valley, living right next door to the chickens are the goats--sourcees of all the milk. Don tells us that all the goats are female, and that their milk tastes better when there are no male goats present. He gets a gallon and a half from each goat every day, which you can buy, “We sell raw goat milk for $16 a gallon; I can’t sell cheese for less than 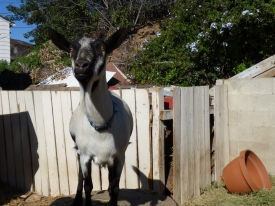 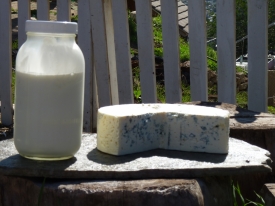 nd so usually we just sell the milk.” With it he can make a variety of things: ice cream, milk, cheese, lotion and even soap.

We couldn’t help but wonder how someone could get into urban farming.

“My grandparents had a 20-acre farm in Escondido,  says Axe.  As a kid he spent summers there helping out. “I was born into it. Here, the goal was to grow our own organic food and it snowballed.”

His creations are getting recognition. “I did get four first place awards and two second place awards at the Del Mar fair with cheeses I made. It was fun,” he said. He also told us where his farming has now taken him. “I am going to be the head cheesemaker at Van Ommering Dairy in Lakeside.  We’re building a creamery and will be making artisanal cheese, such as pale soaked cheddar. Whole Foods is wanting locally sourced cheeses, so we’ll probably be wholesaling to them.” He said Van Ommering hopes to be in production in May and wants to be able to produce 150 gallons of cheese a day.

Van Ommering was set to start making cheese a year ago, but the county said no to the dairy, so they went to Supervisor Dianne Jacob. “She got it done in a month with the new ordinance,” Axe told us.  Cheesemaking is also regulated by the state and inspected.  It must be aged at least 60 days before it can be sold.  So for now, Axe’s own cheeses are for his own consumption and his students to enjoy.  Also he can make more money selling goat’s milk, which is prized for its health qualities, than from turning it into cheese.

Axe told us that there are more health benefits from raw goat's milk that regular milk doesn’t give.” It has lots of Vitamin D and C, and the fat 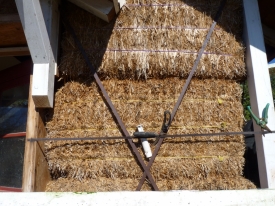 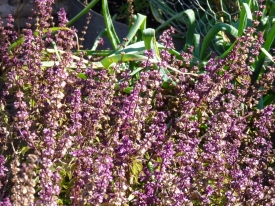 He’s taught Cheesemaking at county libraries, “In three hours we make 3 cheeses—mozzarella, ricotta, and chev, a soft goat cheese. We do a lot of teaching, what you can do with a small area.” He also teaches classes on how to raise goats, gardening classes, strawbale constrution and more. “We do cheesemaking and making lotions and soap, organic gardening, fermentation, and canning."

This urban farm even has flowering herbs such as basil, adding splashes of color to the picturesque scene.

Axe certainly has used his land to its full extent. You can be in his next class. To learn more, visit his website -- ValleyViewUrbanFarm.com. You can also find him on Facebook.