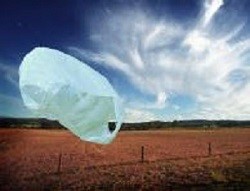 February 27, 2015 (San Diego’s East County) A new state law banning plastic grocery bags won’t be taking effect this summer after all. That’s because opponents led by the plastic industry have obtained enough signatures to qualify a measure to overturn the bag ban for the November ballot, the Secretary of State has announced.

But SB 270, the bill that banned the bags, included funds for retraining displaced workers and $2 million in loans for businesses shifting into making reusable, recyclable bags.

Plastic bags are clogging ocean waters and harming wildlife when animals such as sea turtles ingest the plastic or become entangled in plastic handles.

Linda Escalante, policy advocate for the Natural Resources Defense Council says the initiative is “a greedy attempt by out-of- state plastic bag makers to mislead California’s voters for their own gain.”

If people ask for paper the problem will be reduced. Paper bags are more expensive but that's just the cost of doing business. I spoke with a person at a recycling facility who said the used plastic bags are of little value and get stuck in their equipment. I'm sure it is a matter of cost to the grocery industry. Shareholders over shoppers.