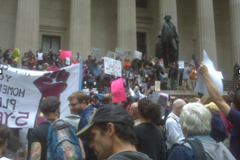 “Many people in the evening rush hour honked. Even more gave thumbs
up or flashed peace signs.” said Wren Osborn, who participated in a protest
at Chase and Nidrah in El Cajon.  View a video from Channel 10 news with
interviews from the El Cajon event: www.10news.com/video/17562521/index.html?taf=sand.

The massive bailout has raised concerns on both sides of the political aisle.

“As disturbing as the volatility and turmoil on Wall Street are, the
prospect of transferring trillions of dollars of risk and losses to taxpayers
is appalling.  How can any American look their neighbor in the eye and
suggest that they should bear the losses for the mistakes and greed of America’s
wealthiest financial firms?” Congressman Darrell Issa (R-San Diego) wrote
in a letter to constitutents. “ I am emphatically against it.”

Senator Barbara Boxer (D-California) has received over 17,000 e-mails and
2,000 phone calls about the bailout, nearly all opposed.  “We all
agree that the government needs to act swiftly to prevent this crisis from
further escalating, but we also need to ensure that as we act, we do no repeat
the mistakes of the past—lax oversight by federal agencies and commissions
and a continued disdain by this Administration for congressional oversight,” Boxer
said in a statement posted at her website.  “If the American taxpayers
come to the rescue in this financial crisis, you have to provide assurances
that they aren’t just taking on bad debt and further jeopardizing their
future.”

Boxer and other Senate Democrats have balked at signing the Administration
proposal backed by many Republicans because it asks for authority “so
broad, it could be used to pay outlandish multimillion dollar benefits to the
same executives who ran their companies into the ground,” she said.

To
restore confidence in markets and strengthen the economy, she called for job
creation through infrastructure investment, extension of unemployment benefits,
and refinancing to help keep people from losing their homes.  “If
we don’t, housing prices will continue to freefall and we will still
be in a mess,” she added. “In California, we have more foreclosures
than any other state—in August more than 101,000 Californians received
foreclosure notices and more than 33,000 lost their homes.” Boxer supports
a proposal by Senator Christopher Dodd, which she called “a fair package
that accomplishes its goals while protecting the American people from a continuation
of the greed and irresponsibility that caused this crisis in the first place.”

Just what else could $700 billion buy?

The Service Employees International
Union (SEIU) sent out an e-mail today proposing alternatives to bailing out
giant financial institutions.  “Tens
of millions of Americans can be helped if we invest in programs that will
help revive our economy,” the letter stated. “We’re proposing
a $350 billion long-term investment in America’s families.”  That
investment proposal includes:

SEIU listed additional programs to aid the economy that it claims would not
cost government a dime:

If you would like to voice your opinion to your Senators and Congressional
members, please visit East
County Magazine’s Citizens Action Center.