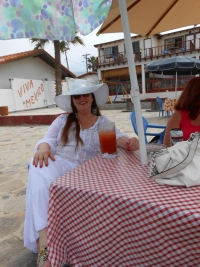 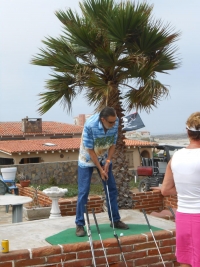 The participants are treated to a continental breakfast of a fruit salad, tiny muffins and lemon cakes with cinnamon buns. Coffee is included but drinks are not available until after 10 am which is the law down here, even in the stores.  I observe coolers being filled with Pacifico beer in yellow and blue cans, even a large one loaded onto the back of a red golf cart. Barbequed chicken and hot dogs are provided after the tourney for participants only.

One of my friends who lives on a sailboat in the marina was one of the first to tee off. He drives the golf ball a considerable distance, which is a nice start to his game. He then hops into a golf cart to continue on with another local member of our community we call Crown Royal Steve. My friend prefers to remain anonymous. 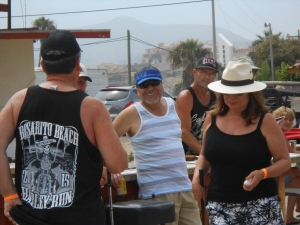 The course was set amongst the dunes covered in vegetation and continued on down the beach for a total of nine holes and 150 little orange flags to mark the “holes“ which were hula hoops. I was told by a spectator that it is much more difficult to play in soft sand than on grass. The players keep their own scores on the honor system.  The course was laid out over about a half mile.

The game lasted until around 3 pm and the hungry players were fed and watered some more as everyone got under shade on this hot summer day in Baja at La Salina where I am lucky to live. 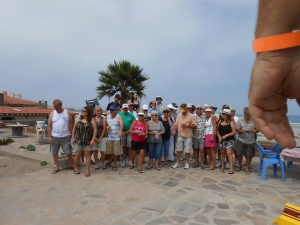 Next weekend is the annual Chili Cookoff which brings a lot of people to compete, enjoy the beach and drink and eat once again. This is a well participated in event so anyone planning on coming down for it needs to make arrangements to stay somewhere close by. The little motel will be all booked by now, I am sure.

Susan A Mahalick has written for the Baja Times, ezine.com and the Secretary of Tourism. She has a book on Amazon called My Gold Coast—Baja, A Practical Guide, 3rd edition.