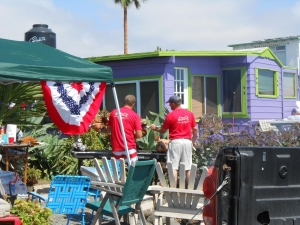 July 7, 2015 (Baja, Mexico)--The day dawned cloudy and cool as it often does this time of year; sometimes the marine layer stays all day, or for a month at a time along the Pacific coastline. At about three in the afternoon the layer was thin enough that the sun came out for a brief time. Time to go to Angel’s Camp for the annual 4th of July pig roast. 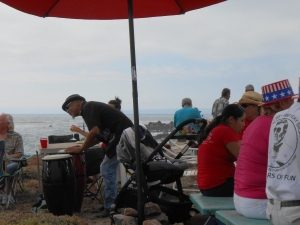 Shade was provided for the food tables which were soon laden with all sorts of salads, desserts, ceviche and homemade beans for nachos that we were informed were cooked for two days in a crock pot to take away the gaseous property by a man who did food servicer for up to 500 for military family's children. My favorite dish in a crock pot contained corn, melted cream cheese and just enough jalapeño flavor to give it a gentle bite. 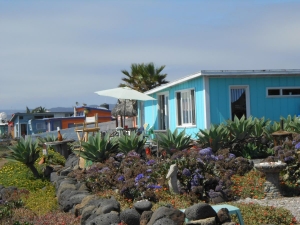 The pig was roasted on a spit to perfection by a team wearing matching red shirts, some of whom got up at 3:15 to get it started so the coals would be hot enough. They learned from last year that a wind break was also a good idea. After cooking the meat was kept warm over Sterno in foil pans that contained chicken broth so it would not dry out. Everyone brought their own libations, margaritas, beer and tequila straight up being the favorites. 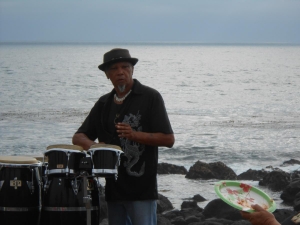 A man who goes by the name of Clarence treated us to his mastery of the conga drums to add to the beautiful time we were having Oceanside for the holiday.

After resting for about an hour after stuffing myself completely with all that good food I went to the La Salina Cantina to watch fireworks on the beach hosted by a private party, who also had a large bonfire to add to the ambiance after dark. I sat drinking my wine looking out the door and visiting with the other patrons, some of which I see on a regular basis as they live here as well. 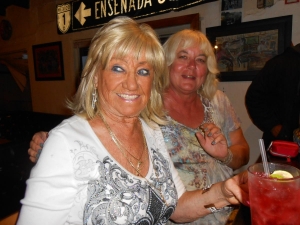 At 8 pm the most excellent band, Wanted, started to play and fill up the dance floor. I was a big Doors fan and their rendition of Riders on the Storm is flawless to the point that if I close my eyes I can hear Jim Morrison’s voice. Whether it is good mimicry or coincidence of voices I am not sure I even want to know. At the end of the day I walked the fifty yards to my building and tucked up with my two cats to await slumber after a perfect holiday. 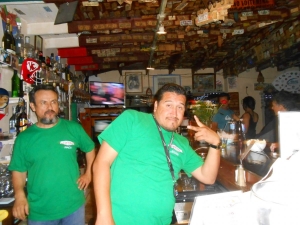 Susan A Mahalick has written for the Baja Times, ezine.com and the Secretary of Tourism. She has a book on Amazon called My Gold Coast—Baja, A Practical Guide, 3rd edition.