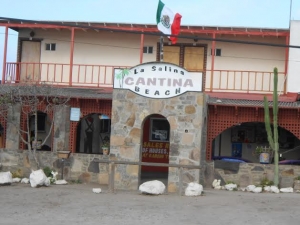 April 20, 2015 (Baja, Mexico)--Located as an exit off the toll road, or Cuota, is La Salina at Km 73. Two exits after crossing the bridge with the estuary to the left as you travel south from Rosarito is a public beach with palapas to the right. It is Easter weekend which traditionally starts the official camping on the beaches, no matter the weather, as Mexicali, Tijuana and Tecate empty out for all the free camping in this part of Baja. Here the fee is $500 pesos, around $4 at the current exchange rate, per vehicle which accounts for this beach not being overcrowded. 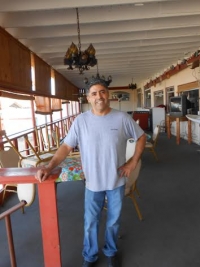 The beach is wide with not many rocks or other debris to avoid when walking. Crushed shells form the secondary layer from the ocean where the tide has come in further than usual.  Small dunes with vegetation dot the next layer as you leave the ocean and head to the La Salina Cantina with ice plant breaking the sand and the building. A small community of houses surround the cantina, some in a gated portion and some not. I live to the left of the cantina as you face the front in an aqua painted building with white trim that looks like a California beach motel. Built as a single family home by a man from New York, it was in major disrepair until recently when a man named Steven Kipping bought it and restored it from the ground up. 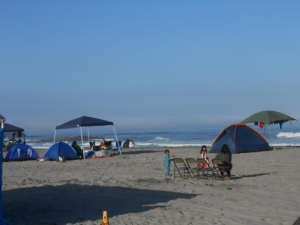 The property is owned by Larry and Susan Speer who inherited it. Originally it was occupied by squatters and legally bought by Jack Speer in 1959 from the Mexican government. The bar/restaurant started as a small adobe home and was added onto over the years. 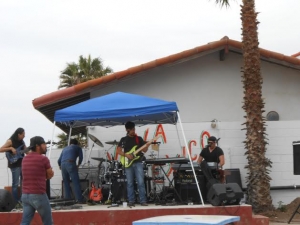 The cantina is in true Mexican style for this part of Baja, with tired looking floors and dollar bills pinned to the ceiling along with memorabilia from local characters who frequented here or lived here throughout the years. A wood stove can heat the largest room on chilly days/nights. There is an outdoor space for the smokers, a playground, outdoor seating further out and a motel to put you up for the night if you desire which only costs $30 per night for a single bed and $40 for a room with two beds. Checkin and checkout occurs right in the bar run by the three handsome bartenders, Paco, Gustavo and Jesse. They take good care of the people who live here as well as every customer who comes through the door.. 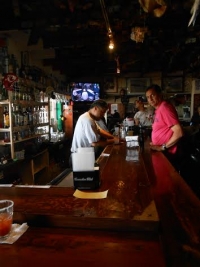 The food is cantina style and most of it is good, traditional Mexican fare with breakfast being my favorite so far. Most places have very good breakfast, and I had an amazing Quesadilla that contained cheese, jalapenos, olives and avocado with the traditional crema, guacamole and freshly made tomatillo salsa for garnishes. Easily enough for two people or two meals it is a good value at $7.00. I judge a bar down here by their Bloody Marys and this one is pretty good and costs $4.00.

The house band which plays on Saturday nights is called Wanted and is comprised of engineers who do not get paid, are excellent, and do this for their love of good music.  I got to enjoy them yesterday afternoon in celebration of Jesse’s birthday when he turned 43.

Susan A Mahalick has written for the Secretary of Tourism and rhe Baja Times. She has a book on Amazon called My Gold Coast----Baja, A Practical Guide.